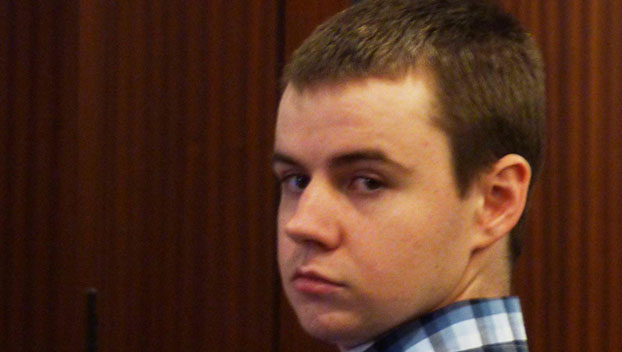 A 23-year-old Frankfort man, who was convicted of second-degree manslaughter in the 2017 death of a passenger in his vehicle, will be back in court later this month after he was cited for traffic violations in September.

Austin Moore was charged after Frankfort Police observed him disregarding a stop sign, a violation, while operating a moped at the intersection of Taylor Boulevard and Benson Valley Road at 10:37 p.m. on Sept. 23. He was also operating on a suspended or revoked operator’s license, a Class B misdemeanor, according to his arrest citation.

He is scheduled for a pretrial conference in Franklin District Court at 1 p.m. on Jan. 27.

In December of 2018, Franklin Circuit Court Judge Phillip Shepherd sentenced Moore to eight years in prison after a 12-person jury found him guilty of second-degree manslaughter, a Class C felony; first-degree wanton endangerment, a Class D felony; and operating a motor vehicle under the influence of alcohol/drugs, a Class B misdemeanor, stemming from a single-vehicle accident that claimed the life of 18-year-old Alyssa Hutcherson on June 14, 2017.

He was facing a murder charge, but the jury found him guilty of a lesser charge of second-degree manslaughter.

Moore was driving a Ford Expedition on Bridgeport-Benson Road when he lost control of the vehicle, left the roadway and struck a tree. Hutcherson, a front-seat passenger, was pronounced dead at the scene. Moore and a teenage passenger were taken to Frankfort Regional Medical Center with non-life-threatening injuries.

In February 2019, he was sentenced to an additional 12 months in prison after pleading guilty to several charges in a separate incident that predated the fatal motor vehicle accident.

During a traffic stop for having a headlight out on June 4, 2017, officers discovered a handgun, two bags of marijuana and digital scales in the driver’s side door of the vehicle Moore was driving.

In that case, he entered a guilty plea to amended charges of possession of drug paraphernalia, a Class A misdemeanor; possession of marijuana and operating a vehicle with an expired license, both Class B misdemeanors; and one headlight, a violation.

According to Kentucky Dept. of Corrections records, Moore was released from the Blackburn Correctional Complex in Lexington on July 1, 2020, after serving less than half of his sentence and was placed on mandatory reentry supervision.

Moore is the son of 6th District Magistrate Lambert Moore.