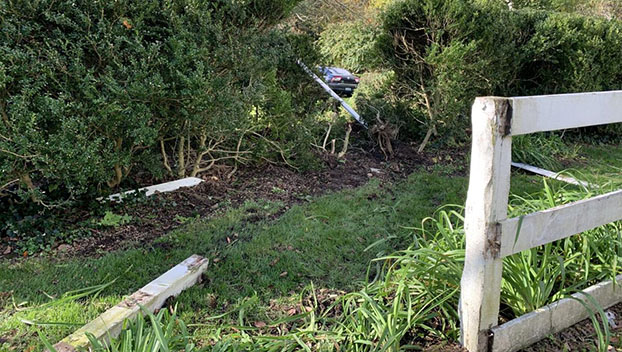 The gardens at Kentucky’s Liberty Hall Historic Site are a quiet, well-kept outdoor space featuring pristine lawns, gardens, and a butterfly habitat behind one of Frankfort’s most well-loved historic buildings.

The space was quiet as usual at 10:23 a.m. when a passerby called Frankfort Police, but one thing was awry: a car had barreled over the garden’s outer fence and hedges, stopping as it plowed into a raised flower bed. Its driver was gone by the time the caller noticed.

The car was reported stolen from the Louisville Road area earlier on Tuesday morning, according to FPD spokesperson Assistant Chief Lynn Aubrey.

“When somebody called us and noticed that the car was there, the driver was not there,” Aubrey said.

The car was a gray Mercury Milan with Franklin County plates.

“It wasn’t the Gray Lady that was driving it or anything like that,” Aubrey added jokingly, in reference to the popular ghost story at the site.
The car was lifted into the air as it was extracted by Carey’s Towing on Tuesday afternoon.

Liberty Hall Executive Director Sara Elliott said that she was in the adjacent Orlando Brown house when she was notified of the crash around 11 a.m.

She said she was unsure what the damage would cost or how quickly it could be repaired, but that she would have to get estimates and speak with the site’s garden committee about it.

Elliott guessed that the hedge damaged by the car was about 30 years old.

Kentucky native has jellyfish species named after him