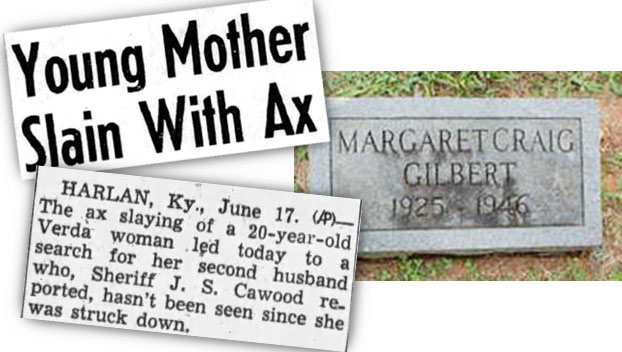 Those who grew up in Harlan County probably remember the ever-popular ghost story, “The Highway 38 Ghost,” often referred to as, “The Lady In White.” The local legend has no shortage of sightings, and the era of the VTC (Verda Transportation Company) buses, along with taxi drivers transporting travelers from Harlan to the Evarts area, seems to be when the accounts and tales of this apparition, a lady wearing a white gown, began to circulate through the communities of Harlan County.

The Lady In White is said to appear in the vehicles of her unsuspecting victims who are nearly always male. She has been spotted on the side of Highway 38, and to the horror of drivers and passengers, many times can be seen sitting in the backseat of the car shortly thereafter. The earliest tales of this ghostly woman were brought to us by the VTC bus drivers and taxicab drivers who say their vehicles were empty, when suddenly a forlorn woman appeared in their rear-view mirror.

Through the years, after more residents of the area began to own their own cars, the sightings of the apparition began occurring frequently in these privately owned vehicles.

The decades from around 1950 to present-day are filled with credible witnesses, including law enforcement officers, claiming to encounter a phantom woman on the entire stretch of highway, with most encounters occurring between the communities of Coxton and Verda.

The sightings and ghost stories began in the mid-1940s and continue today. With numerous accounts of ghostly experiences on the haunted Highway 38, one must ask themselves: Who is this woman? According to legend, the reason, undoubtedly, for the haunting was that a woman was killed on, or near, Highway 38, the highway that connects the city of Harlan to the Evarts area of the county. The problem with this theory was that no murdered woman had ever been identified….that is, until now.

On June 16, 1946, at Verda, Kentucky, a 19-year-old bride, Marguerite Craig, was brutally murdered with an ax by her groom. Marguerite had been married once before, and her four-year-old son from that marriage was the only witness to the heinous crime.

Who was Marguerite Craig? Marguerite, often called Margaret, was born Dec. 20, 1926, in Harlan County, Kentucky. Her parents were Samuel “Sam” Craig and Flora “Flo” Harmon Craig. According to census reports, the family resided at Crummies, Kentucky, and were from Anderson County, Tennessee. She had one sister, June, who was stillborn, and four brothers, Clyde, Samuel, Donald, and Billy Joe. She was first wed to John Gilbert in 1941 when she was only 15 years old. Marguerite and John had a son, William, in 1942 and the couple divorced shortly thereafter.

On May 4, 1946, Marguerite remarried and was probably excited about starting a life with her new husband. She was, no doubt, overjoyed to have found love again and envisioned a long and happy life for herself. Tragically, only six weeks later, on June 16 something unimaginable happened in her new home at Verda, Kentucky. Apparently, neighbors heard her son screaming and found Marguerite dead by her bedside. Her face had been bashed in with an ax that now lay beside her; her white satin nightgown turned crimson in a pool of blood.

Marguerite’s new husband was arrested for the murder and plead guilty to involuntary manslaughter in October of that same year. After serving only a couple of years, he was out of prison before 1950. It is because of this that his name will not be included, because it is currently unknown if he truly committed the crime. All we know is that a beautiful 19-year-old bride was slain during what should have been the happiest time of her life.

Marguerite “Margaret” Craig was buried in Pleasant Hill Cemetery, Rocky Top, Anderson County, Tennessee. We believe that our Lady in White rests about 2 hours away from Highway 38.

Marguerite “Margaret” Craig was killed off Highway 38 at Verda. She is quite possibly our young bride who wears the white satin nightgown she was murdered in, or perhaps she is wearing her recently worn wedding gown. It is no wonder that she appears to men more often than women. For she may be desperately trying to make it back home to her young son, or imaginably searching for her groom.

The identity of Marguerite Craig was uncovered by local researcher Tony Felsoi. He, along with myself, Darla Jackson, began gathering facts and comparing them with the accounts of the legendary ghost. The similarities to the two had an uncanny accuracy that could not be denied. According to Felosi, “The location of the murder, the circumstance in which it occurred, and the fact that the victim was a new bride and wearing white at the time of her death, are details that cannot be ignored. All aspects of this murder parallel this famous Harlan County ghost story.”

Seventy-five years after this tragic murder, Marguerite “Margret” Craig’s name is once again appearing in the Harlan Enterprise. After decades of being called “The Lady In White,” her true name may finally have been revealed. Although it is without certainty that she is truly the infamous “Lady In White,” no other crime or victim match with such accuracy. It seems that the earliest sighting on record happened in the fall of 1946, only months after her death. Until a better candidate is uncovered, Marguerite Craig will be attributed to the hauntings on Kentucky Highway 38, and for now, she claims the infamous title of, “The Lady In White.”

Six-week bride killed with ax
Chicago Tribune
Harlan, Ky., June 17 (AP)–Sheriff J. S. Cawood said a Verda coal miner was being sought today in connection with the ax slaying of his wife, Mrs. Marguerite Craig Gilbert, 20. Marguerite who was married about six weeks ago, died in Harlan Hospital early today several hours after her face was crushed with an ax, the sheriff reported. Cawood said a neighbor was attracted to their four room home last night by the cry of her 4 year old son by a former marriage: “You’ve killed my mother.” The victim was found on the floor near a bed which appeared as if it had been slept in. The blood stained ax was found on the floor.