After more than a year, Kentucky’s Great American Dollhouse Museum is back open 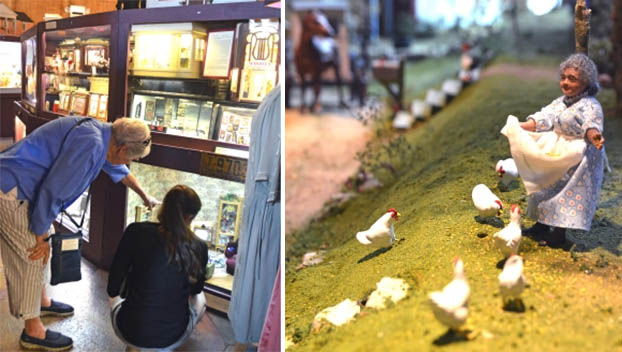 After closing around late March 2020 due to the pandemic, the Great American Dollhouse Museum is back open for business and perusal of the more than 200 miniature worlds within its walls.

The museum and shop reopened July 7, and curator Lori Kagan-Moore said the museum has already seen many visitors from several different states in the week since its reopening. She noted the hours have changed – it’s no longer open on Tuesdays like it was for about 12 years. The hours are now 11 a.m. to 5 p.m., Wednesdays through Saturdays.

Only a couple of hours at the museum saw visitors from not just around Kentucky but also Denver, Colorado; Stillwater, Oklahoma; Illinois, and Utah, to name a few places.

“I know I’d recommend anyone to come see it,” said Rosie Morris, a visitor from Nelson County who has been coming to the museum countless times over the past 10-12 years. She said she missed the place, and Kagan-Moore.

Nancy Little, a Danville resident, brought her granddaughter Edith Will, who is from Stillwater, Oklahoma, to the museum for the first time Wednesday. Little has lived in Danville for about eight years, has talked about the museum for a number of years and wanted Will to see it. They eyed the displays, noting the captions and information posted under some of them, and the small details in the scenes.

Some of the miniature scenes are funny, Little said, and some teach about history, like one display she pointed out that teaches that some freed African-American slaves hid and protected those who escaped slavery in their homes.

Kagan-Moore said the displays don’t necessarily get switched out — instead, she describes the museum as a work in progress, with new additions building upon existing exhibits.

“As we develop new displays, they take over what was there and enrich the place,” she said.