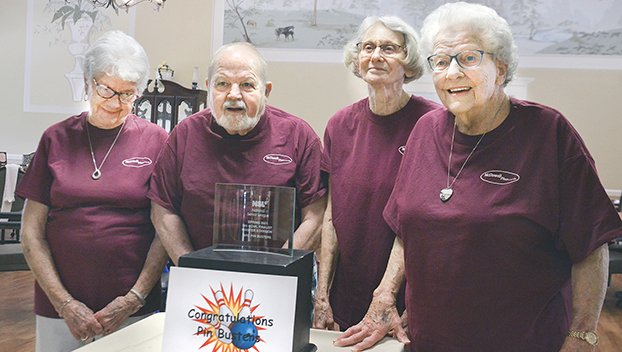 Four residents at McDowell Place of Danville, Kentucky, were finalists in a national bowling tournament — but they never stepped inside a bowling center to compete.

Wii bowling is a simulated video game where bowlers use a device instead of a bowling ball to “throw” a virtual ball down the lane seen on the TV screen. It is played indoors in the comfort of their home.

MPD Activity Coordinator Gina Scott said they had four teams participating in the National Senior League Spring Wii Bowling tournament. Teams start the season bowling in conferences made up of eight teams each, she said. The competition lasted seven weeks then the “NSL crowns championships in each conference. Communities receive certificates of Bowling Excellence for winning conference championships,” Scott added.

“After conference play, the top 32 teams in each of seven divisions bowl in a one-and-done format to determine National Championships and runners up (also called finalists) in each division.”

This season, MPD had the only teams from Kentucky to compete, Scott said. And the McDowell Pin Busters were finalists in the Master 2 Division and played against Canal 1 from Canal Park Community from Westport, Connecticut.

Other teams from McDowell Place were:

Scott said those who bowled were “very exited about competing on a national level.” She added that it was the first time Wii bowlers from MPD participated, and some of the residents had never even bowled before.

Kentucky man pleads guilty to being involved in Jan.…