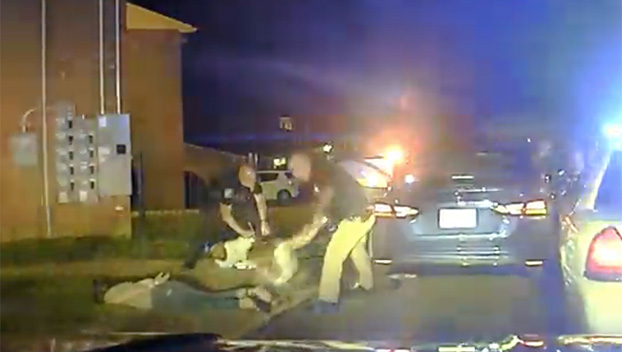 It was a classic case of “good cop, bad cop,” per attorney Greg Belzley.

The conduct of Belzley’s “bad cops” in this case led to two women filing a lawsuit in federal court alleging that Franklin County Sheriff’s deputies violated their civil rights when pulling them out of a vehicle driven by a man who had evaded police for several minutes on the night of Sept. 20, 2020.

Meanwhile, the lawsuit states that officers from the Frankfort Police Department showed “restrained, professional conduct” in assisting the front passenger out of the car.

The lawsuit names sheriff’s deputy Phillip Ray and Sgt. Nathan Doty as participants in the act of allegedly violating the Fourth and Fourteenth amendment rights of Maysia Harris and Hannah Clark, who were pulled out of the back of the car without resisting arrest and were not charged with any crimes related to that incident.

Dash camera footage from FPD provided to The State Journal by Michael L. Hawkins & Associates law firm shows that the driver, Delano Washington, had willingly laid out on the ground with his hands up after a sheriff’s office vehicle crashed into his. Harris and Clark were in the back seat, while a fourth individual was in the passenger seat.

The video shows several police officers approaching Washington, and those in the vehicle, with firearms drawn.

Doty, who appears to have driven the car that wrecked into Washington’s, jumps out of his window and immediately launches himself onto Washington, who was already on the ground and being restrained by an FPD officer.

Shortly thereafter, Ray approached the vehicle with his gun pointed at Clark and Harris. He first grabbed Clark and pulled her out of the vehicle, later dragging her across the ground; Clark did not visibly resist arrest.

Harris had put her hands up outside one of the vehicle’s windows shortly after the chase ended. Her hands remained up until Ray grabbed her and slung her to the ground. Belzley said that Harris was later diagnosed with a concussion.

The lawsuit describes Ray as “viciously yanking them from the vehicle and slinging them to the ground, with such force as to cause them demonstrable physical injury.”

Sheriff Chris Quire did not respond to a request for comment on the lawsuit or the incident.

“If I’m the sheriff and I’m looking at this video, I want to hire the guy who trained Frankfort cops to train my guys because those guys behaved professionally and got the job done,” Belzley said. “The sheriff’s deputies, to put it mildly, had an anger management problem at the scene.”

The lawsuit names Franklin County government as a defendant for hiring Ray allegedly knowing that he “overreacted to events, was violent, used unnecessary and excessive force, and was likely to violate FCSO policies.”

Ray was hired in late 2017 and completed training in 2018 under former Sheriff Pat Melton. He was previously employed by the Franklin County Regional Jail.

The lawsuit names Quire for conducting what it calls a “sham investigation” on the situation. That investigation cleared Ray and Doty, Belzley said.

“Defendants Franklin County and Quire engineered a sham investigation that absolved Ray of any consequences for his misconduct,” the lawsuit reads. “On information and belief, the true purpose of such investigation was not to prevent such incidents in the future, but rather to provide Ray a defense to this civil action and was thus an effort to deny the Plaintiffs due process and a fair trial.”

At another point in the document, the lawsuit said that Quire and Doty conducted the investigation.
The State Journal filed an open records request for Doty and Ray’s personnel files, as well as the internal investigation, on Thursday after WDRB first broke the news.

Belzley said that the investigation made the situation “a whole lot worse.”

“It’s one thing to have an incident of obvious police misconduct, like you have here, captured on video,” Belzley said. “It’s just made a whole lot worse when the officials, the supervisory officials who can address the problem, decide instead to try to cover it up.”

Along with violating Harris and Clark’s Fourth and Fourteenth Amendment rights, the suit for damages claims that Ray “assaulted and battered” the plaintiffs, that the defendants were “grossly negligent,” and Quire and Doty “abused their public office” in conducting the investigation.

Per Belzley, Washington was charged with careless driving, evading police, tampering with physical evidence, possession of marijuana, two counts of wanton endangerment, disregarding traffic control devices and criminal mischief. Harris and Clark were not charged with any crimes.

The dash cam footage shows that city police joined the chase while an FCSO cruiser was in hot pursuit of Washington’s vehicle along Wilkinson Boulevard.

The chase continued up U.S. 60/Versailles Road at a moderately high speed until Washington’s vehicle veered right onto Sunset Drive and accelerated through residential streets at a high speed, coming out on East Main and eventually pulling into Prince Hall Village Apartments.

Belzley emphasized that he thought the national conversation on law enforcement issues had become fraught, and that this case was representative of being able to celebrate good police work while also calling out bad police work.

“The conversations on issues like these has gotten totally warped,” Belzley said. “… This is about good police work versus bad police work. And everybody shares an interest in celebrating the good police officers we have while at the same time doing what we can to either retrain or get rid of the bad cops.”