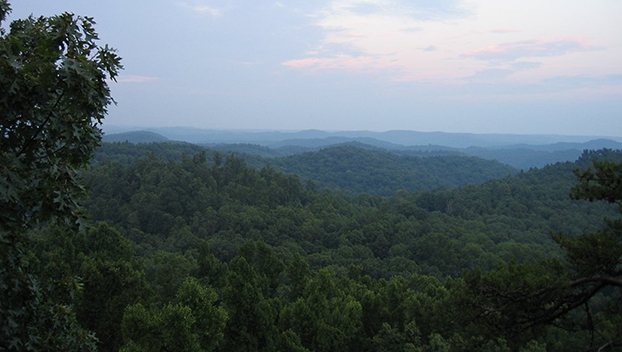 Deep in the Daniel Boone National Forest, Mary White, the district archeologist for the forest service, used a small brush to sweep away newly discovered petroglyphs, which are pre-historic carvings.

The discovery of a tiny carving of a turkey print increased the historical significance of the archeology excavation site by leaps and bounds. There are only seven examples of petroglyphs throughout the entire district.

From May 24 to June 18, Eastern Kentucky University professor Jon Endonino and 13 students partnered with the Daniel Boone National Forest Service to preserve a rock shelter that has been looted by people looking for artifacts such as arrowheads.

The partnership was born through the desire to protect the forest. According to White, the Forest Service has too much ground to protect from looters and preserve historical sites. Thankfully, EKU can provide the services the Forest Service needs for free while also providing students with hands-on experience applicable to their careers.

In his work, Endonino estimated that 40% of the site has been damaged. In the areas where students dug holes to excavate, the archeologists noted almost a foot of disturbance in the soil, which decreases the integrity of the site.

“Even though they have been negatively impacted by past actions, there is still a lot of information that can be gathered from these sites,” he said.

The National Register of Historic Places requires a site to fill the criteria of both significance and integrity to gain preservation status, and this site is at a disadvantage due to the looting. However, the petroglyph leaves Endonino hopeful the organization would grant the status to the site.

Additionally, students located what Endonino called thermal features, areas people use with fire such as cooking stoves. A dark line in the soil indicates the presence of burning materials like charcoal and leaves.
Endonino and his students also found a Kirk corner notch point, or a triangular blade that looks like an arrowhead, dating from 9,000 years ago. Multiple centuries have been represented in their discoveries. Endinono said his team had found cultural components which date up to 1600 A.D., which he believed to be derived from the ancestors of the Shawnee Indians.