“I haven’t given up yet.” 8-year-old wins Kentucky award for tireless advocacy for shelter animals. 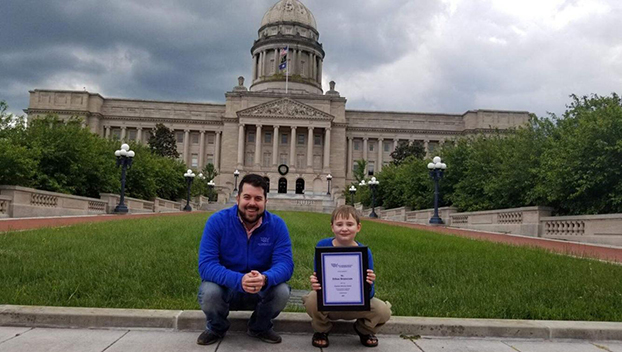 Ethan Branscum continues to advocate for shelter animals, and his work is attracting attention.

The 8-year-old resident of Frankfort recently received the 2021 Humane Advocate Award from the Humane Society of the United States–Kentucky.

“Given Ethan’s tireless commitment to bringing awareness to shelter and rescue pets across the state and passing legislation on their behalf, we couldn’t think of a more worthy recipient for this year’s award,” said Todd Blevins, the Kentucky state director with HSUS.

Ethan first drew attention for his work to pass legislation to have shelter pets named the official state pet of Kentucky.

Ethan wrote several legislators last session about his proposal, and state Sen. Adrienne Southworth, R-Lawrenceburg, was able to file a bill at the last minute that would “name and designate as the official pets of Kentucky domestic cats and dogs that reside in or have been adopted from Kentucky animal shelters or rescue organizations.”

Inclement weather scrambled the legislature’s schedule and the bill didn’t make it out of committee, but Southworth did introduce a resolution that passed. The resolution asked Kentuckians to consider adopting pets from a shelter.

Ethan is determined to have shelter pets named the state’s official pet.

“I haven’t given up yet,” he said. “We’re working on that, and I’m not going to give up until it passes. After that we’ll go to the national level.”

Right now Ethan is focusing on other local issues. He’s still doing his show, “The Rescue Report,” on his social media

Because visitors aren’t allowed at the shelter due to COVID restrictions, volunteers take pictures of adoptable animals and send them to Ethan to use.

76-year-old woman dies after being attacked by mother cow