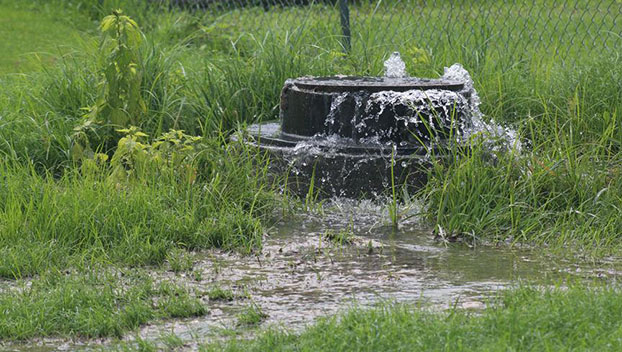 “It just hits you in the face.”

That’s how Hank Schweickart, a Coolbrook subdivision resident, described the awful odor he and his neighbors had to endure after raw sewage pushed above ground in his yard in August 2018.

The overflow issue stemmed from a lightning strike during a storm that damaged the sewer’s pump system and created an odor so awful that some residents opted to leave their homes until it cleared.

“You can’t image what’s in my yard,” Schweickart told the Franklin County Fiscal Court, adding that his son had been spending more time in the hog house because it smelled better than their home.

For the better part of two decades, local officials have been working to correct severe sewer issues in the Farmdale Sanitation District, which services Coolbrook and six other subdivisions in southern Franklin County.

Now, the fiscal court is seeking federal funding to install an interceptor sewer system, which would eliminate the need for six wastewater treatment plants and direct all wastewater to a centralized pump station and send it to the city for treatment.

The court submitted its request for Fiscal Year 2022 Appropriations Community Project Funding to U.S. Rep. Andy Barr, R-Ky., last month. The county is asking for $12 million. The total cost of the project is $14 million.

“We feel good that it’ll go through,” Judge-Executive Huston Wells told The State Journal, adding that the county has been working on the project with Barr for about six years.

Wells said there is the possibility of funds coming in via the American Rescue Plan Act (ARPA), a $1.9 trillion relief bill signed by President Joe Biden last month.

“Hopefully one or more of those pots of money will be used to get this project moving forward quicker,” he added.
The earmark money is still a question mark, Wells said.