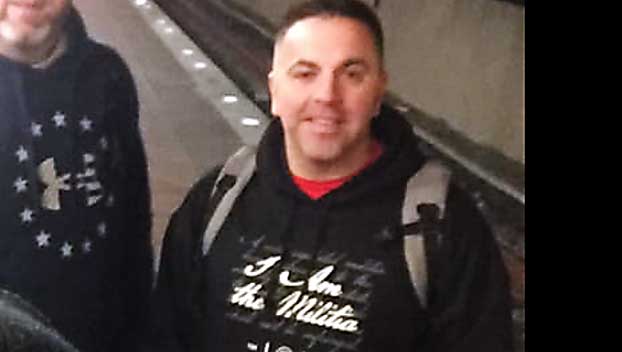 Chris Wiest is confident that his client is going to win.

His client in this case is Franklin County Deputy Sheriff Jeff Farmer, who recently sued all five Franklin County public defenders for defamation, seeking damages exceeding $1 million. The federal civil suit was in response to a letter to Sheriff Chris Quire penned by the public defenders critical of Farmer’s attendance at the Jan. 6 pro-Trump rally that preceded a mob siege of the U.S. Capitol.

Most recently, Wiest and a group of other attorneys from the Northern Kentucky/Cincinnati area argued against a motion for dismissal filed by attorneys for the public defenders. The public defenders, in their motion, claimed that Farmer failed to properly identify instances in which they defamed him and that their criticism of Farmer was protected by the First Amendment.

In a response filed last Friday that reasserts many of the points brought up by Farmer in the suit, his attorneys argue that they indeed properly identified a defamation “First Amendment retaliation” claim, that “false statements” made by the public defenders are not protected speech and that legal evidence brought forth to criticize Farmer’s police record did not hold up in court.

“This case involves the worst kind of lies, which are lies intended to destroy, overnight, what it took a professional lifetime to build,” the response reads. “Plaintiff Jeffrey Farmer is, or was, until the actions complained of, a well-respected narcotics detective with the Franklin County Sheriff’s Office. His work was respected by trial court judges who do not share his political affiliation or views. That was due, in part, to the fact that he is a consummate professional who did exceptional work keeping the community safe.”

In the wake of the defenders’ letter, Farmer was for more than a month reassigned to desk duty while an investigator hired by Quire reviewed allegations made by the public defenders in a letter to Quire that was widely disseminated through traditional and social media.

The investigator, ex-FBI agent Carl Christiansen, released a report that Quire made public and said “cleared” Farmer of major wrongdoing, particularly the allegations contained in the letter. Quire since sent a letter to Farmer critical of his use of social media and put him back on the street working general investigations instead of narcotics.

A former police chief and policing policy expert later told The State Journal that Christiansen’s report wasn’t adequate and that someone should have contacted two people who spoke with The State Journal about their allegedly traumatic experiences while being arrested by Farmer, Kyira Glover and Antione Andrews. Christiansen also did not include in his report anyone quoted anonymously in an NBC News report about Farmer.

Of note to Farmer’s attorneys, and previously pointed out by Quire, is the fact that the public defenders’ exhibits of cases that they believe reflect some level of racial bias or misconduct on Farmer’s part were mostly ruled by judges in Farmer’s favor.

Those cases — highlighted by the public defenders’ motions filed on their clients’ behalf — include two people who have spoken to The State Journal about their experiences, Andrews and Glover, as well as two others. The motions either ended in Franklin County Circuit Court judges overruling them or because the parties struck a plea deal before a ruling.

Wiest highlighted that the exhibits attached to the public defenders’ motion have “had their day in court” and failed.

“They are saying he did these things based on filings, and then judges dismissed them,” Wiest said. “… So they’re saying, ‘you should just believe our allegations that were proven to be untrue.’ That’s not how it works.”

Further, the response to the motion forms an argument based on what Wiest’s legal team believes is protected by the First Amendment and what is not.

Both Wiest and the public defenders have agreed that Farmer had a right to attend the Trump rally, which protested the results of the 2020 presidential election on the same day Congress gathered to certify the results. Wiest believes, however, that the public defenders’ criticism of Farmer was not protected free speech.

“The law is clear that an “intentional or reckless falsehood, even political falsehood, enjoys no First Amendment protection,’” the response reads. “With respect to their defamatory letter, Defendants self-servingly cast themselves as concerned citizens raising issues with law enforcement personnel. Putting aside the serious misrepresentation of their actions here, this simply is not what the Complaint alleges.”

The response argues that in criticizing Farmer’s attendance at the D.C. demonstration, a First Amendment-protected act, the public defenders’ letter was not protected by the same amendment.

One key consideration in the suit is whether the public defenders spread “falsehoods,” which Wiest claims led to adverse effects on Farmer’s professional and family life.

“This letter contained a number of provably false statements, which Defendants either knew were false or recklessly disregarded the falsity of which, based on the public record before them and their own demonstrated personal animus toward Defendant,” the response reads. “As a result of the Defendants’ defamatory letter, Plaintiff endured adverse job consequences and injury to his reputation and future job prospects, while his children were harassed at school.”

Part of that “animus” referenced by Farmer’s legal team allegedly came from Public Defender Kristin Gonzalez. The response again mentions a text in which Gonzalez wrote to an officer that she’d made it her “mission to screw with” Farmer, former Sheriff Pat Melton and the late former Deputy Rick Qualls. It also attempts to link that text to a previous case that those three worked on in which Gonzalez’s now-husband, Brad McGaughey, was found to have been involved with drugs.

Gonzalez said that she had no official response to offer on the latest filing in the case.

In 2016, McGaughey was sentenced to 12 months’ probation for criminal attempt to possess a controlled substance, possession of marijuana and paraphernalia charges. McGaughey is a former Franklin Circuit Court deputy clerk and was accused of having sent internal police documents to a drug dealer, per a State Journal report from 2014.

The latest response goes a step further and claims that there were “suspicions within the Franklin County Sheriff’s Office that Defendant Gonzalez was involved with McGuaghey in his drug activity.”

The public defenders’ motion to dismiss provided additional text messages from an exchange previously quoted in Farmer’s complaint, which shows that an officer in contact with Gonzalez was critical of Farmer’s police conduct, calling him “shady.”

Another topic that Wiest touched on was also covered by the Christiansen investigation: Farmer’s whereabouts in Washington, D.C., on the day of the Trump rally.

Though the public defenders’ letter and later statements have cited Farmer’s posting on Facebook that he was at one point at “the base of the (Capitol) steps” and his wearing an “I am the Militia” shirt to the rally, Wiest maintains that Farmer remained peaceful and out of trouble.

Farmer denounced the mob siege of the Capitol in an interview with LEX18.

If Farmer did commit any wrongdoing in Washington, Wiest argued that the FBI would have found out about it.

According to CBS News, more than 410 defendants have been arrested in relation to their activities in or near the U.S. Capitol on Jan. 6.

Wiest said that he believes the case will end up being tried in front of a jury, where he claims the public defenders’ letter will be “put to the test.”

The defamation suit was filed in the U.S. District Court of Eastern Kentucky and has been assigned to Judge Karen Caldwell.

“It’s going to end up getting tried in a federal jury,” Wiest said. “… The allegations in their letter are ultimately going to be put to the test, and I am truly confident about it.”

If Caldwell denies the public defenders’ motion to dismiss Farmer’s suit, Wiest said, the case would move to discovery and that there would likely be a jury trial.

Counsel for the public defenders, partner at Dinsmore law firm Kenyon Meyer, did not respond to a request for comment by press time.