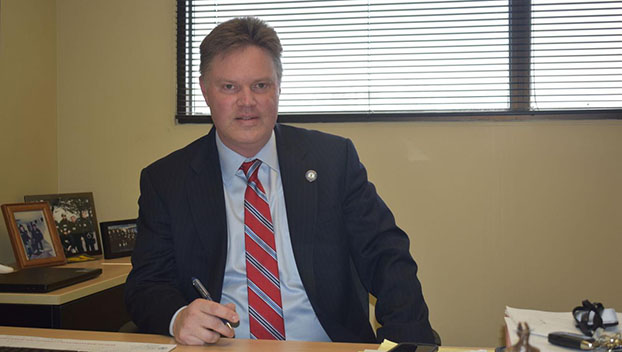 Jim Huggins had been eligible to retire from the Federal Bureau of Investigations since 2016, but was happy working in the bureau’s Lexington office.

But when the Frankfort native was conducting an interview at Kentucky Attorney General Daniel Cameron’s office, he heard an offer that intrigued him.

“Barry Dunn is the deputy attorney general, and one time I was interviewing Attorney General Cameron on something totally different,” Huggins said. “When I was done, Barry came in and said, ‘We’re thinking about creating a public corruption unit. Would you be interested in being part of it?’”

Huggins had one stipulation, though.

“I said to him ‘I wouldn’t want to be ever told who I could or couldn’t investigate based on politics,’” Huggins recalled. “He told me, ‘We will never tell you who to investigate based on their political affiliation. We’re not going to play politics at all.’ He said if someone’s breaking the law, then investigate him. That sold me on it, and I believe it’s 100% sincere.”

So upon retiring from his federal post in Lexington after eight years there, the 52 year-old Huggins took the state role and is working to form the agency’s public corruption unit.

Huggins emphasized that his work won’t be that much different from that of an FBI agent, as his focus was on public corruption in Kentucky. One bonus, he said, is that he won’t have to meet certain dollar criteria in the cases he investigates.
Having only been three weeks on the job, he said the specifics of his new role aren’t fully sorted out yet.

Eight years in Kentucky, and beyond

Huggins said that in the Lexington FBI office, he covered a large swath of Kentucky, from Shelbyville to the state’s eastern edge.

His father, Jim Huggins Sr., also investigated public corruption in the area for several years. Overall, Huggins Sr. spent 27 years with the FBI and still lives in Frankfort. The younger Huggins graduated from Franklin County High School in 1986.
The two are the only father-son duo to have retired from the Lexington FBI office.

He called it his biggest case in a 25-year FBI career.

“He would direct health care companies that if they wanted to do business with the state of Kentucky they had to hire this one firm …,” Huggins said. “The firm did marginal work and they’d take the money, which turned out to be millions of dollars, these companies gave them and they would kick it back through straw donations campaign to Democratic politicians. In fairness, the politicians had no indication that they knew about it, but Tim Longmire would direct that money to certain people in the form of campaign donations and he kept a lot of money for himself.”

Beyond Frankfort, Huggins pointed to the case of Keith Hall in Pikeville. Hall, a coal operator and former state legislator, was found to have bribed a state mining official.

In Frankfort — where his jurisdiction included local government in addition to the statehouse — Huggins said he ran into a particularly difficult case.

“There’s no doubt these guys were guilty,” Huggins said, adding that he couldn’t disclose the details. “We interviewed probably 15 or 20 people about a group of people who were committing corrupt political acts. In the end we couldn’t prosecute because all these people that we’d interviewed had bad criminal histories, so we weren’t willing to take it to the jury. I could never get anything on audio or video, either. That case is my white whale, so to speak.”

In his time at the bureau in the Bluegrass State, he noted that the citizenry treated the FBI with more respect than it did in California, where he previously worked. He also said that he thought both law enforcement corruption and political corruption were prevalent in the area.

“Political corruption and law enforcement corruption are the two that I think are the worst,” Huggins said.

He added that while the reality of working public corruption cases may not be as fast-paced as television shows make it seem, it’s important and sometimes grueling work. At the FBI, he estimated that he worked eight to 15 cases at a time.

“Typically, you review a lot of records,” Huggins said. “What I mainly do is look for people to interview and — it sounds cliche — but we try to put together pieces of a puzzle and adjust the investigation accordingly.”

Huggins started his investigative career after graduating from the University of Kentucky in 1990, working for the Drug Enforcement Agency (DEA) at its Detroit office. In 1995, he jumped into a role with the FBI in San Francisco, wearing a few different hats while there.

He worked some public corruption cases but also helped out with the SWAT team in San Francisco.

“I’ve probably worked 50/50, almost an equal amount of cases on Republicans or Democrats over the span of my career,” Huggins said. “We all have our own political leanings, but when it comes down to it, if someone’s a crooked politician, then they’re betraying the public’s trust and it doesn’t matter what party they are.”

Of note, Huggins was involved in perhaps one of the FBI’s most high-profile cases: the arrest of the Unabomber, a domestic terrorist named Ted Kaczynski who shipped bombs to victims.

Kaczynski started bombing people he believed were responsible for the destruction of the environment in the late 1970s.

Huggins said he was there in 1996 when the bureau arrested the mathematics professor-turned-anarchist at his cabin in a remote stretch of Montana.

“Seeing him when they pulled him out of the cabin, I couldn’t believe that here was this guy who eluded the authorities for years and years and he’s just living in a little tiny shack where there’s no electricity or anything,” Huggins said.

He said that in doing this sort of work, experience is the main factor that dictates success.

And after a 25-year career in the FBI, Huggins is thankful for his experiences and the opportunity going forward.

“If I had to go back and do it again I absolutely would have joined the FBI,” Huggins said. “There was never a day where I regretted it. I liked the FBI, and when it comes to opportunities, I’m just glad this became open because I was able to transition right into another law enforcement position.”