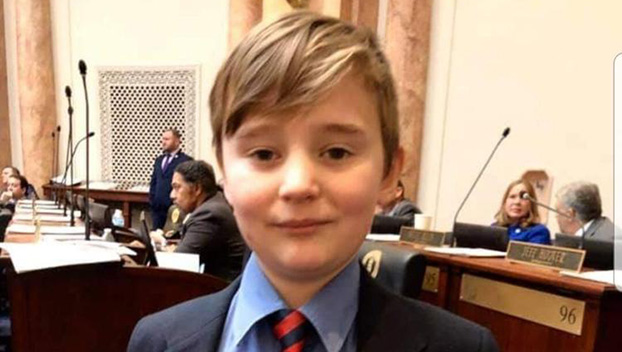 When Ethan Branscum heard in 2019 that shelter pets had been named the official state pet of Ohio, he had an idea.

Why not do the same in Kentucky?

The 8-year-old Frankfort resident is on a mission to make sure that happens.

“It’ll eventually get passed, hopefully soon,” Ethan said. “I don’t care if I have to wait until I’m 13. I want it to get passed.”

Last year Ethan contacted then-state Rep. Joe Graviss, D-Versailles, who sponsored a bill that passed the House but died before it could be heard in the Senate.

Ethan took up the cause again this year, sending letters to legislators about the official state pet.

One of the letters reached state Sen. Adrienne Southworth, R-Lawrenceburg, Ethan’s senator, on the last day bills could be filed, and she was able to file a bill at the last minute that would “name and designate as the official pets of Kentucky domestic cats and dogs that reside in or have been adopted from Kentucky animal shelters or rescue organizations.”

Then came nearly a week of ice and snow that threw a wrench into the legislature’s schedule.

“When we came back from the ice break it was all hands on deck,” Southworth said, “and there were priorities for what got heard.”

Southworth’s bill didn’t make it out of committee, but she did introduce a resolution that was passed.

“It essentially is asking Kentuckians to consider adopting pets from a shelter,” she said.

That’s what Ethan wants to see.

He has a Facebook page (facebook.com/Ethansrescuepetproject) and Instagram page (instagram.com/ethans_rescue_pet_project), and he’s starting a show, “The Rescue Report,” that will appear on his social media pages and feature news about animals and pets available for adoption.

The next episode will be out Saturday morning, and the pet being featured for adoption is Mabel, a small dog at the Franklin County Humane Society.
“I’m going to have a very, very big guest,” Ethan said. “I want it to be a surprise.”

Animals have been a lifelong interest for Ethan, who is homeschooled.

“When I was pretty young I was interested in exotic animals and birds,” he said. “We have a lot of birdfeeders in our yard.”

The family includes two dogs, Hank, a Boston bull terrier that came from a rescue organization, and Liberty, a mixed breed.

“My parents (Miché and Kevin Branscum) found Liberty on the side of the road,” Ethan said. “I can’t take credit for that because I wasn’t born yet.”

Ethan and his work on behalf of animals have caught the attention of people across the state.

“He’s really something,” said Todd Blevins, Kentucky state director with the Humane Society of the United States. “I come from a family of teachers and have been around kids a fair share of my time, but I’ve seen very few that have Ethan’s dedication to a cause, his creativity.”

Ethan’s work comes at a time when shelters are struggling because of COVID. Both the Franklin County Humane Society and L.I.F.E. House for Animals are conducting adoptions, but only by appointment.

Blevins shared a nationwide report released this month from 24Pet ShelterWatch, a pet insurance company, that showed a decrease in the intake of dogs (32%) and cats (23%). There’s been an increase of 19% in foster participation and a 24% decline in adoptions. The data was from March 14, 2020, to March 12, 2021.

24Pet also released a report on trends in the East South Central region, which includes Kentucky. The most recent data is from October and shows a 19% decrease in intakes, a 10% increase in fostering and a 17% decrease in adoptions.

In the past, Ethan has had a lemonade stand in front of New Leash on Life, the thrift store located on the corner of Broadway Street and Wilkinson Boulevard that benefits the local humane society.

Ethan is working on fundraising ideas for the new humane society shelter, but COVID has made planning difficult.

Southworth plans to file another bill next year about making shelter and rescue animals the state’s official pet.

“I can work on it for a whole year,” she said. “This area has so many pieces. There’s the no-kill movement, volunteer skills, a lot of different pieces of the puzzle.”
Southworth will be in touch with Ethan.

If the bill passes at the state level, Ethan would like to conduct a national campaign to have shelter and rescue pets designated as the official pet of the United States.

Blevins sees the designation of shelter and rescue animals as the official state pet as a bonus for the animals and those who work to make their lives better.

“It would be a symbol like the cardinal, the golden rod, all those symbols I learned about as a kid,” he said. “Ethan working to make it a state symbol is an enduring testament to shelter and rescue animals and their plight in the state.”

It also shows the caring side of a child who has held two of his birthday parties at Morning Pointe, a Frankfort long-term care facility. He couldn’t do that for his last birthday because of COVID.

“The world is a better place because kids like Ethan are in it.”