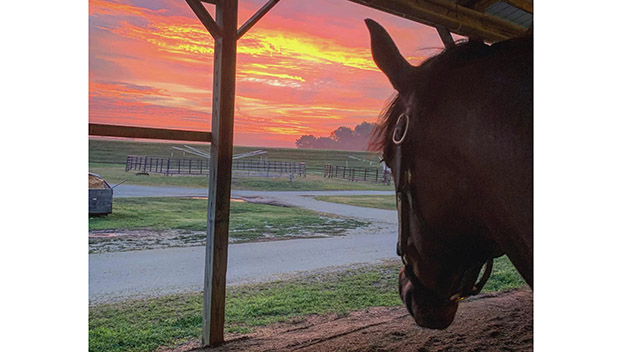 The daytime temperature was 19 degrees on Wednesday and snow surrounded Eric and Brooklyn Foster’s barn with 17 thoroughbreds that were waiting their turn for their daily workout.

“With the weather like it is, we’ve been lucky to be able to jog the horses,” Eric Foster said. “…The horses can hardly handle more than a day or two of not doing anything. They’re such an athlete they want to be moving all the time.”

During the past seven years, the Fosters have been training racehorses at their 16-acre Utica farm on U.S. 431. They even have a small, oval track for running, galloping and breezing the horses.

Prior to getting into the racehorse business, Eric Foster, 43, worked as a construction welder but had a background in horses.

As a youth, Eric Foster was a barrel racer and then at age 17 he was galloping and exercising horses for other thoroughbred trainers.

Brooklyn Foster said she lived on a farm when she was young but that she hadn’t spent much time around racehorses until she met her husband. And when she was laid off from her job a few years ago, she joined her husband full-time in their Foster Family Racing business.

She said it became a “sink or swim” venture.

“I’m all for goals and dreams and I knew he was passionate about it,” Brooklyn Foster said. “And that’s just very contagious — his passion, his drive to be successful. …Although I grew up on a farm, the competition part of what we do was very, very new to me. I’ve had a pretty big learning curve but I’m pretty proud of us.”

Together they have built up their stable of thoroughbreds by owning their own horses, by partnering with local investors and by what’s considered the most important part of racing — winning.

“The first week of January of this year we went over $1 million in earnings,” Eric Foster said. “…That’s pretty hard to do because everybody is trying to win.”

They each have their own roles — Eric Foster trains, exercises and hauls the horses to the races while Brooklyn Foster manages the barn.

Although they do have two to three others who work and help out with the horses, the Fosters carry a large chunk of the load.

“It’s between 8 to 12 hours a day, seven days a week,” Eric Foster said. “There’s not an easy day. When the snow hit, it just added more work for us.”

The horses they obtain are through claiming races or horse sales. Depending on pedigree, racehorses can sell for between six and seven figures.

“We’re working with a small amount of money compared to some of these people we’re competing against,” Eric Foster said. “Even though ($23,000) is a lot of money to me, that’s nothing. In this sport, people are very proud of what they spend and they want to outbid you.”

They are training a horse that an owner paid $170,000 to purchase and will soon enter its first race.

The Fosters are also working with a small group of local owners who have a 4-year-old colt named Johnny Unleashed — a $10,000 purchase at the Keeneland sale. He’s earned about $158,000 with four wins out of 14 starts. So far, $50,000 has been the horse’s largest winning purse.

Eric Foster said watching a horse cross the finish wire first as a trainer and an owner is something special to experience.
“It’s almost indescribable not just for us but witnessing the owners winning a race for the first time,” Eric Foster said. “It doesn’t take but that first win for somebody to realize why they’re doing this.”

And with training thoroughbreds, the question of the Kentucky Derby is there. The Kentucky Derby — the most prestigious event in horse racing — is held at Louisville’s Churchill Downs on the first Saturday in May.

Daviess County has produced one Derby winner — Spend A Buck, which won the race in 1985 by 5-3/4 lengths. He still holds the fourth-fastest time — 2:00.2 — in the Kentucky Derby’s 147-year history. During its racing career, Spend A Buck earned more than $4.2 million.

Eric Foster, however, said success in horse racing isn’t necessarily defined by winning or competing in the Derby.
“It’s hard to set your expectations to that,” Foster said. “Of course that’s something you want to do. But you want to be happy with your accomplishments rather than being disappointed for not hitting that level every year. …I think a lot of the (owners) just enjoy watching the horses run and they just want something that can pay its own way — that’s the main goal.”

Currently, the Fosters are racing at Turfway Park in Florence where they have 14 starts and three wins at the meet.

But they will also be racing at other tracks such as Keeneland in Lexington and Ellis Park in Henderson when their meets start this year.

“Everything has to go right to win and it only takes one thing to mess it up,” Eric Foster said.

Still, the Fosters are encouraged by how far they’ve come in the “sport of kings” in a seemingly short amount of time.

“Since we’ve started, we’ve done five different add-ons to this barn,” Eric Foster said. “We just weren’t expecting to keep it going like we have.”