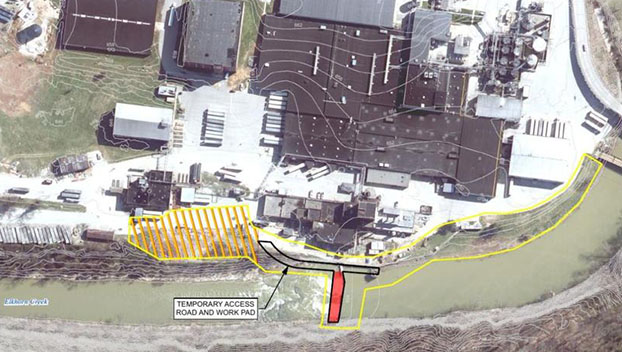 The Elkhorn Creek Dam will be removed in early March, according to representatives of Beam Suntory. Beam Suntory operates the Jim Beam Old Grand-Dad plant located right next to the low-head dam.

Beam Suntory’s Sara Roston said that the dam was built in the early 1900s, making it around 100 years old. Roston said the international spirits company, in partnership with the U.S. Fish and Wildlife Service, plans to start removing the dam on March 8.

Beam Suntory is asking curious people to refrain from visiting the site while the work is taking place. The Bluegrass Wildwater Association (BWA) said in a Facebook post that Beam Suntory will hold a forum on the project in coming days and will share photo and video updates of the deconstruction process.

Canoe and kayak advocates have said for several years that the dam provides a serious safety hazard to those interested in recreation on or near the creek. Elkhorn Creek is a much-trafficked site for recreational activities.

Multiple people have drowned at the dam, most recently in October 2018, when 35-year-old kayaker Matthew Hughes, of Lexington, got sucked into the undertow after holding onto a rope for nearly two minutes.

Former President of BWA Hanley Loller said that death kicked off conversations about the dam’s removal, but that wasn’t the first time he brought up safety concerns.

In a 2009 interview with WKYT, just after a 16 year-old girl nearly drowned there, Loller decried the danger presented by the dam and called for its removal.

“People have died on this dam before,” Loller said. “It’s a known hazard. The big issue really is the dangers to people who don’t understand the dangers of a weir dam.”

A weir dam circulates water downstream from the dam underneath the surface and back toward the dam. Loller said that people often get caught in the “hydraulic jump” that draws objects back into the dam.

Per a pre-construction notification and application to the Kentucky Division of Water, the dam will be mechanically removed after a crew creates notches in it to lower the water level, exposing the concrete for removal. As the dam is being removed, concrete material from the dam will be used to construct a temporary work pad across the entire stream. The dam’s footer will remain, as removal would require significant excavation.

“Overall, the removal is a positive thing for both us and for the community, and we’re glad to have partnered with U.S. Fish and Wildlife to make this happen,” Roston said. “… Removing it will alleviate (safety) issues, and will also support overall improvement to water quality and wildlife habitats.”