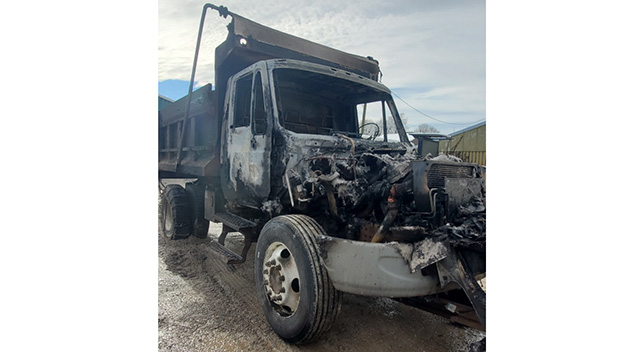 A fire Sunday afternoon destroyed a county truck used for snow removal, but it could have been worse.

“We could have lost everything,” said Allan Curtis, superintendent of the Clark County Road Department.

Curtis said firefighters were able to save nine other trucks as well as the building, which sustained only minor damage.

Winchester Fire-EMS Battalion Chief Chris Whiteley said every vehicle the county has to plow snow from county roads and spread salt was in that building.

Whiteley said Road Department employees themselves did good job of getting the trucks out of the building once the fire was extinguished, including using a trackhoe to remove the burned dump truck.

Curtis said it was county firefighters who first noticed the smoke and called 911, and everybody responded.

The fire happened about 1:30 p.m. in Building 8 of the Road Department property at 5 Hopkins Lane off East Broadway. Curtis said firefighters “did a very impressive job,” and the fire was contained to the one truck, although the others had some smoke damage. Curtis said the fire melted some skylights in the building and did some damage to the ceiling, but nothing major.

The battalion chief said an investigation indicated the fire started in the truck’s cab and spread to the engine compartment, but the cause is still officially “unknown.”

Curtis said the county already has two new dump trucks on order that were supposed to have been delivered in January or February, but he hasn’t seen them yet. He said Monday he was going to call about them that day.

It sometimes takes a year or more to get “specialized equipment” like a county road crew truck, he said.

Kentucky man sentenced in chase that lead deputies on…