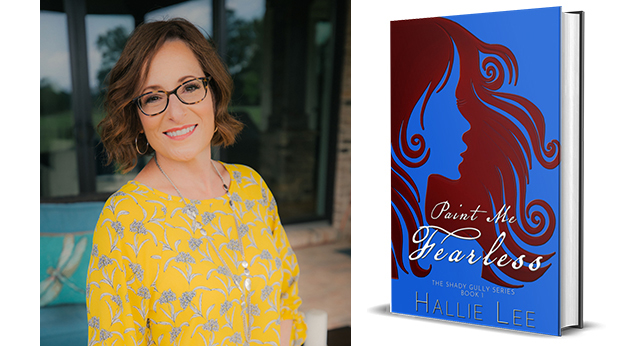 Nicholasville author Hallie Lee is celebrating her debut novel, Paint Me Fearless, which released on Jan. 6, 2021, in hardback, paperback, and all major ebook formats.

The novel, which is already generating positive feedback from readers and critics alike, claimed the Number 1 spot on Amazon.com’s Hot New Releases chart in the Contemporary Christian Fiction category, in addition to climbing to Number 4 on the online retailer’s Bestsellers chart in the same category, nestled snuggly between novels by bestselling authors Charles Martin and Donna VanLiere.

It’s the spring before high school and Desiree and Robin have little in common.

Desi, having moved to Shady Gully, Louisiana, from Albuquerque, is miserable as she tries to adjust to small town life, while Robin, forever doomed at the “bottom of the popularity pyramid” is terrified she’ll never measure up.

When Desi is introduced in class, Robin hates her on sight, but fate draws these two alienated girls to one another, and together they overcome mean girls, weight hang-ups, and disturbing family dynamics.

Their bond stands the test of time, even as their paths diverge and they raise families of their own, but when a shocking betrayal ignites old insecurities, the layers of their friendship begin to unravel.

When they confront the lies that ravaged their lives, the truth brings them full circle … to Desi’s long buried trauma, and to Robin’s doomed and obsessive quest for perfection.

Born and raised in Louisiana, Hallie Lee’s screenplays and books are inspired by the southern landscape, which she says is “rich with cantankerous, salt of the earth folks destined to be on the page.”

Lee points to film producer Ronnie Clemmer (A League of Their Own) as a mentor who helped her find her voice as a novelist. “He managed to give me notes and suggestions, without destroying my confidence,” she says. “That isn’t as easy as it sounds. Criticism can make or break an artist. Delivering it gently and constructively is the rarest of gifts, and for this I’m grateful to everyone who encouraged me.”

She and her family, furry kids included, now live in Nicholasville, Kentucky, near Lexington. At the moment, she’s gathering research as she prepares for her daughter’s wedding. Yes, readers will be invited to a Big Shady Gully wedding in the very near future.

COVID-19 has claimed as many American lives as three…