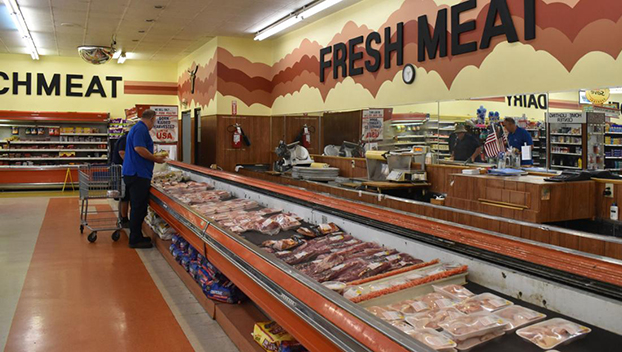 “You can talk to just about anybody in South Frankfort and if you talk for 15 minutes or so, the need for a grocery here will come up,” Armstrong said.

The petition, which asks the City of Frankfort to retain the former Pic-Pac building as a grocery store, has more than 2,800 signatures.

“Grocery options are extremely limited, and there are very few businesses left to compete with Kroger and Walmart,” Armstrong’s petition reads. “With Save a Lot on the West side of town going out of business, we will be left with only these corporate behemoths, and many people with transportation impediments will not be able to easily access food on a regular basis.”

Particularly since Pic-Pac’s closing, the problem of downtown Frankfort’s “food desert” has been much discussed. The State Journal has published several articles on the issue, several citizens have decried the lack of food sources downtown, and the city was even awarded a federal grant to come up with potential solutions to the problem.

With the departure of Pic-Pac, much of downtown Frankfort became a “food desert,” which the U.S. Department of Agriculture defines as a low-income census tract where a substantial share of residents have low access to groceries. On the USDA’s map using data from 2015, when Pic-Pac was still in business, all of downtown was considered a low-income census tract, but only eastern portions of the city qualified as food deserts. With Pic-Pac’s closure, that designation likely expanded to a significant portion of downtown.

Though discount grocery chain ALDI opened last year on the west side, officials with the closer-to-downtown Save a Lot announced last month that it would close at the end of January, potentially worsening the problem.

Several community leaders and stakeholders met as part of the “Local Foods, Local Places” grant in September 2019 with hopes of addressing the issue. The grant is a federal initiative that helps communities reinvest in existing neighborhoods and improve quality of life as they develop a local food economy.

But for a number of reasons, many of the initiatives and goals listed upon completion of the grant meetings appear to have gone by the wayside — the biggest reason being the COVID-19 pandemic.

Given the news of Save a Lot’s closure on the west side, some in the community are still asking for answers that could solve the problems discussed by those who took part in the grant meetings.

The community goals listed coming out of the grant meetings were somewhat lofty: Develop a local foods coordinator position, create a food council and determine a solution for downtown Frankfort’s food desert.
Connie Lemley, treasurer at the Franklin County Farmer’s Market, recounted some uncertainty about what to do after Pic-Pac closed.

“I don’t feel like we came to any good answers about groceries downtown,” Lemley said. “There is a section of the action plan about that … and it’s really an ongoing challenge for the community.”

Kentucky Capital Development Corp. President and CEO Terri Bradshaw said that for tasks she was designated as “lead” on, some needed funding that never came. Such was the case for a community education initiative.

Bradshaw said another unfunded initiative was to perform a needs assessment for the city’s food landscape.

Adam Leonberger, with the Franklin County Cooperative Extension Office, was also tasked with leading some initiatives after the meetings.

One particular success that he cited, which he partially attributes to the pandemic, is an increased number of people interested in participating in the local food economy by starting their own gardens at home.
A conversation that Leonberger said has been put on hold is how the Old Federal Building — currently Kentucky State University’s downtown annex — might factor into downtown’s food economy.

“The biggest thing was trying to figure out what they wanted to do with it,” Leonberger recalled. “Some of that is a little up in the air … . They floated some ideas, like using it as a teaching kitchen and teaching people how to cook nutritionally. Some mentioned how it could also be used to process produce … so more local foods from people who might not have the tools out on their farms can get processed and then out to people.”

One initiative that Bradshaw was able to dive deeper into was the potential for a retail grocer to replace what Pic-Pac provided to downtown — and in particular South Frankfort.

She said she worked with Associated Wholesale Grocers Inc. to explore downtown Frankfort’s options.
“We don’t have the population right now for a retail grocery,” Bradshaw said.

She said she reached out to several smaller grocers, including satellites of larger companies like Kroger and Whole Foods as well as some ethnic grocers, but none of the potential suitors was interested enough to take on the Pic-Pac building.

But the efforts might not have been in vain if a proposed project led by a community group — comprised of Joseph Fiala, Birch and Michelle Bragg, and Taylor Marshall — comes through.

Though still in flux, the effort would be multiuse establishment — Fiala called it a “community food hub.” It would be located on Wilkinson Boulevard where the old Smitty Mart once was, next to Poppy’s Bakery.
The establishment would be very close to one of the Frankfort Housing Authority’s public housing projects.
Bradshaw said she is working to get it extra funding through a KCDC-backed loan as well as helping Marshall with reapplying this year for a federal grant.

“The grant that they applied for was a federal grant to bring local/healthy foods to areas that may not have access to that normally,” Bradshaw said. “They’re planning to take SNAP and EBT food stamps, and to do a program where second-day produce is much cheaper.”

Bradshaw said the facility, which Marshall said late last year could open as early as May, could be just what Frankfort needs in the post-Pic-Pac era.

“It’s not just a local grocery,” Bradshaw said. “What we were first trying to do is replace Pic-Pac with something like Pic-Pac. It will do what we were looking to do, which is provide groceries to people downtown.”

Another potential source of groceries, though offerings would be minimal, for downtown is the potential opening of a convenience store. Frankfort businessman Jeevan Malli hopes to convert the old Walkers Car Wash on Second Street to a convenience store that would have offerings similar to that of a gas station.

Multiple community food providers said that the need for another grocery source in downtown is evident.
At the Franklin County Farmers Market, which runs multiple programs for lower-income families and individuals, Lemley said that they’ve seen higher engagement than usual.

“This year we’ve had higher use of SNAP than ever before,” she said. “It’s very clear to us that there’s a need to having access to fruits and vegetables around here … . Plenty of people since Pic-Pac closed have mentioned that that’s an issue.”

In addition to accepting SNAP benefits, the Farmers Market also runs a “Double Dollars” program, which allows those using SNAP to get double the credits for certain foods at the market.

Franklin County Emergency Food Pantry President Regina Wink-Swinford mourned the coming loss of the west side Save a Lot in particular.

“If you think about the neighborhood that’s right around Save a Lot, there are a number of apartments — some of them lower-income — around there,” Wink-Swinford said. “I’m not sure what those residents are going to do. I guess they’re just going to get on buses.”

Swinford also noted that the city limits how many grocery bags a rider can take on a bus. That limit is four, she said, a potential source of frustration for those who need to feed their children.

City Commissioner and downtown resident Leesa Unger said that while she’s open to any ideas that might allay Frankfort’s current food desert issue, she has hopes for some sort of grocery store in Frankfort’s core.

“There needs to be good community discussion on this,” Unger said. “Everyone wants a grocery store downtown. I think it’s finding the right business, the right people. I know what I want — I want to just be able to go grab a gallon of milk and some vegetables downtown. There are so many options and we just have to find the right one for us.”

Armstrong, as a downtown resident himself, said that the Pic-Pac building seems to be the most likely solution.

“A lot of the reason I want the Pic-Pac building to stay a grocery is it’s one of the only buildings that we know can house a grocery in downtown Frankfort,” Armstrong said. “There are no other buildings with the same features it has.

“I wholeheartedly support the Fire Department in getting to a new building. It’s a necessity. With that being said, so is food. If somebody doesn’t have a car, they’re just stuck between a rock and a hard place. A lot of people don’t have transportation around here.”