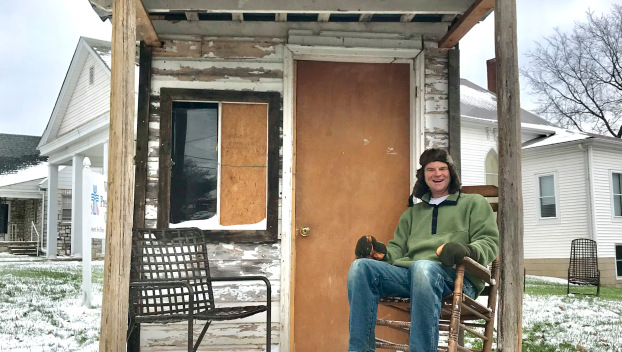 ‘Living with less so that others might have more’

On a cold, bright Wednesday, Andy Bathje sits on the porch of a rough wooden shack at the corner of Wilmore’s Main Street and Lexington Avenue, drinking coffee and talking with friends.

The executive director of AdventureServe Ministries, had spent the night in the tiny house and would be living there throughout the rest of the week to raise awareness of those who are hungry or homeless or who live in poverty.

It’s something he does every year during the week of the Bluegrass Community Foundation’s Good Giving Challenge to raise money for his organization.

His mantra is “Living with less so that others might have more.”

“A lot of our ministry work is taking volunteers from churches and the community and doing service projects for people who live on the margins in some way,” Bathje said. “Maybe they’re dealing with substandard housing that has some similarities to this structure. Or they’re getting help from a homeless shelter, or they’re living with disabilities. … So by me sitting here, it’s a visual representation of people in need.”

It’s also a way for him to better understand the less fortunate by living under the same conditions, such as being cold inside a dwelling.

He has a warm sleeping bag and a space heater, which kept the shack at about 40 or 50 degrees Tuesday night when it was freezing outside.

By being on the most visible corner in Wilmore, it’s a reminder that people on the margins often live in the least desirable places, where it’s noisy, they have little privacy and they may feel they’re unsafe.

And, because people see him there and stay to talk, he gains insights into others’ lives.

Bathje recalls that one year a woman came by and thanked him for bringing attention to the plight of the poor. She said that earlier that year, she and her boyfriend had been homeless in Jessamine County and had to sleep on a playground, even though both of them worked.

“It’s a reality here in our community,” he said.

One of the things he does during Good Giving Challenge, which runs through Saturday, is give an interview each day with a community leader who works with people in need. One of the people he had talked with last week was Nicole Markle, the family and youth services center director for West Jessamine Middle School, who works to help hungry and homeless children. She told him that during the coronavirus pandemic, she’s seeing more people who are in need who are working parents with kids in public schools.

Others who came by to see him around 2 p.m. last Wednesday were his friends Chris Nielsen and Jonathan Carman, better known around town as “Mowgli,” who built the shack for him.

The wood came from an old dining hall, and he liked the fact that the house had “mouse holes” patched with pieces of metal.

It is located on the property of Wilmore Presbyterian Church, which has been generous in allowing Bathje to stay there and use its facilities for the past several years.

AdventureServe Ministries is a nonprofit, interdenominational organization that connects young volunteers with opportunities to serve people in need in Appalachia and the Bluegrass, engage in environmental stewardship, experience outdoor adventures and “faith in action.”

It is located at 50 Campground Lane in Wilmore. More information is available at www.adventureserve.org. The mailing address is P.O. Box 127 Wilmore, KY 40390.

Supporters may donate online to AdventureServe through the Good Giving Challenge Dec. 1-7 at the Bluegrass Community Foundation’s bggives.org fundraising site.