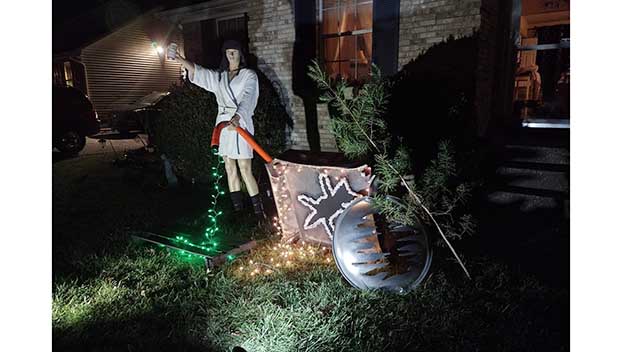 A “Cousin Eddie” display in Kentucky apparently looked a little too real and police were called to check it out.

After receiving the call, a dispatcher described the scene to responding officers as “a male standing outside. He is naked. He has a robe covering part of his body. He is exposing himself, and he has a hose between his legs.”

Officers arrived at the Shepherdsville home to find a mannequin in the yard that looked like Cousin Eddie from “National Lampoon’s Christmas Vacation.” It was decorated with a robe, a hat, a cigar and a beer and was holding what appeared to be an orange hose, WDRB-TV reported.

Homeowner Joni Keeney said she decided to put up the display from her favorite Christmas movie to have some fun.

“Everybody has a ‘Cousin Eddie,’ in their family, everybody,” Keeney said. “I just want people to have a good Christmas and get a laugh,” Keeney said.

Responding officers did get a laugh and took some photos of the display, WDRB reported.