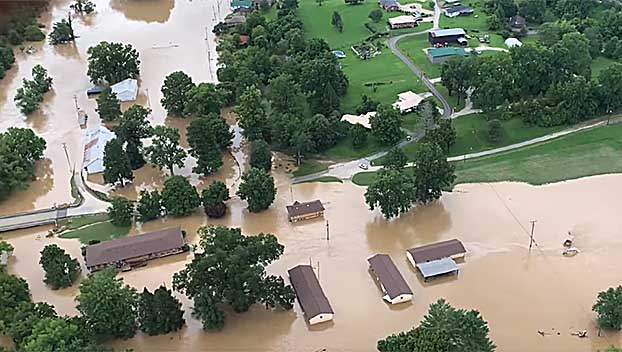 Gov. Andy Beshear called out the Federal Emergency Management Agency for denying too many requests for assistance in flood-ravaged eastern Kentucky, where the number of people who died as a result of the disaster has risen to 39.

The official death count rose Thursday when an additional death was counted in Breathitt County, Beshear said. He didn’t identify the person or provide other details.

“I ask the commonwealth to join me in praying for our fellow Kentuckians during this difficult time,” the Democratic governor said in a tweet.

Earlier this week, a high school athlete who spent days helping his fellow eastern Kentuckians clean up from the historic flooding was added as the 38th person to die as a result of the disaster.

Aaron “Mick” Crawford fell ill suddenly and died a few days later. His mother, Ronda Crawford, told the Lexington Herald-Leader that her son “went into cardiac arrest,” but the family still does not know what caused her son’s death.

On Thursday, the governor reported that the stricken area was “likely out of the emergency phase of responding to this disaster.” Search-and-rescue teams that remained in the region to wait out additional threats of heavy rains have been given the green light to go home, Beshear said.

“That is a major step that we have been waiting to reach this moment, basically since the start of this,” the governor said.

As the massive cleanup continues, the governor ramped up pressure on federal emergency officials to do more to help more people rebuild their lives.

Beshear complained Thursday that FEMA is denying too many requests for assistance, and urged people getting turned down to take their cases directly to agency personnel in the region. The governor said “we need to see better outcomes” for more eastern Kentuckians applying to FEMA for recovery assistance.

Beshear said he conveyed his concerns to President Joe Biden, Vice President Kamala Harris and top FEMA administrators. Beshear accompanied Biden during a visit to the region Monday, when the president declared the federal government would provide support until residents were back on their feet.

FEMA Press Secretary Jeremy Edwards responded Thursday night that agency personnel will be in the flood-stricken region “as long as it takes” to help Kentuckians recover. Edwards said the agency’s leadership is working to “reduce barriers and cut red tape.”

“If you were denied assistance, that is not necessarily the end of the road,” Edwards said. “Something as simple as a missing document can cause an application to be deemed ineligible. The system isn’t perfect, and we know that the bureaucracy can be frustrating.”