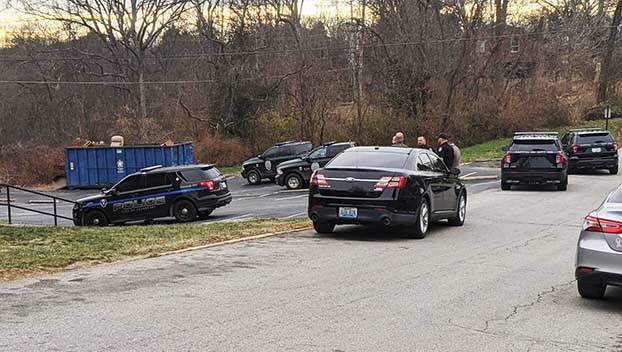 Kentucky’s Capitol and Capitol Annex were placed on lockdown Tuesday morning, following a nearby police chase of an armed man.

Two men were fleeing from police in a stolen vehicle before stopping west of the Capitol grounds, media outlets reported. The men fled the vehicle on foot, with one man shooting at officers, though none were hit, according to Frankfort Police Department spokeswoman Lynn Aubrey.

An armed suspect was in the annex garage at one point before being apprehended.

Both the Capitol building and the annex were on lockdown, with no visitors allowed entry, before 9 a.m. EST. The lockdown was lifted later in the morning.

The armed man was in custody, while the other one — who went in the opposite direction of the Capitol — was still at large, according to Aubrey. That man did not fire shots at police.

Aubrey identified the detained suspect as Joshua Gibson, a 23-year-old from Louisville. Gibson was booked into Franklin County Regional Jail on charges of fleeing or evading police, criminal trespassing and receiving stolen property of $10,000 or more.

In a statement, Gov. Andy Beshear’s office said: “The governor appreciates the professionalism and swift response from the Frankfort City Police, the Franklin County Sheriff’s Office and the Kentucky State Police.”