Once given 6 months to live, veteran will compete in pageant 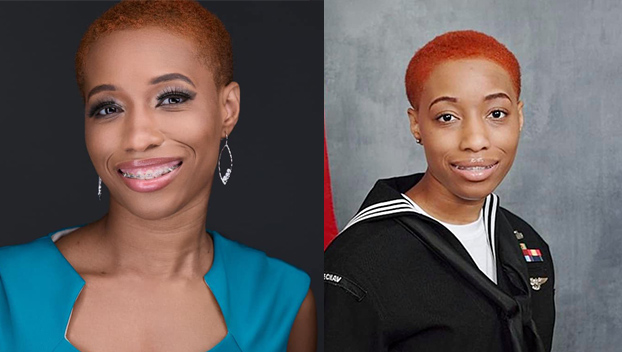 Practicing her walk has a whole different meaning for Arlena Johnson.

Just two years ago, she couldn’t put weight on her feet, let alone move them. And she only had use of one of her hands.

Now she’s headed for the runway and vying for the Ms. Veteran America 2021 crown. The pageant will be live-streamed online on Oct. 10 at msveteranamerica.org.

When the 30-year-old Louisville native was diagnosed with Neuromyelitis Opticain November 2017, doctors told Johnson she only had six months to live and a 1% chance of ever walking again. The central nervous system disorder often attacks optic nerves, spinal cord and sometimes the brain, and can cause an array of issues with the bladder and bowels.

But against all odds, she’s remastered walking and ahead of the pageant, she’s even retrained herself to balance in high heels. Today, holding her posture means moving gracefully with the metal rods that run through her back.

The morning I met her at her South Louisville home, a bladder bag rested at her feet during our interview, but during the competition, it will be tucked beneath her custom-made gown.

The competition aims to show the woman behind the uniform, and while her seven years of service in the U.S. Navy is admirable, there’s so much more to her.

Her pageant coach, Ocielia Gibson Sprowl, says Johnson already has the intellect, drive, heart, and accomplishment to succeed. The rest is just polishing.

She isn’t training to be a queen.

Johnson already is one.

LIFE ON THE USS WASP

Today Johnson is medically retired from the U.S. Navy, but in May 2010, seven years before Neuromyelitis Optica ravaged her body, she enlisted hoping to implement more structure in her life.

Johnson found the stability she craved while stationed on the USS Wasp, but her service also fostered an overwhelming desire to help people. That’s largely why she’s participating in the Ms. Veteran America pageant.

There’s more to this crown than being “girly, girly,” as Johnson put it. The Ms. Veteran America pageant was founded on the principles of grace, poise, beauty and service. The program benefits Final Salute Inc., a nonprofit that helps homeless veteran women find safe and suitable housing. As both a veteran and someone who experienced homelessness as a child, she’s highly passionate about this cause. Women stretch themselves thin, and she’s built her pageant platform on the concept of self-care.

“Women, I don’t care what nobody says,” she told me. “We give birth, and we still keep pushing. … In order to take care of others, you have to make sure your own cup is full. I want to uplift others, as women.”

As we spoke, she recalled some of her most transformative moments in the military. Among them were the 30 days she spent stationed in New York and New Jersey, providing relief to Hurricane Sandy’s victims in 2012.

She was a culinary specialist and during the storm itself, she had to keep cooking while large sheet pans flew out of ovens and clanged angrily onto the kitchen floor around her. She pointed to a small scar on her arm and recalled how oil jumped out of the fryer as the ship rocked.

Johnson and the cooking crew tied the oven doors shut just to keep everything in place. She always had good sea legs but walking through the kitchen, she could feel Sandy’s wrath as the floor quaked beneath her.

When the winds waned and the water calmed, she had a new mission. The kitchen team had to feed people in New Jersey and New York who had lost everything, while the ship’s own pantry was running low. Johnson knew the situation was bad when the kitchen ran out of bread, and she had to start making it from scratch.

Then they ran out of flour, and they even drained backlogs of jelly and peanut butter packets.

Almost everything usable was gone.

Hurricane Sandy showed Johnson that a person could have everything in life one day, and then the next day everything could change.

Another five years would pass before she’d feel that rattle, personally, as Neuromyelitis Optica swooped into her own life like a storm.

FROM A TWITCHING EYE TO IMMOBILITY

Johnson’s medical downslide started with a small twitch in her eye.

She knew she was stressed. At 26 years old, she was working full-time at the Pentagon and she was just two classes away from earning a bachelor’s degree from Trinity Washington University. She had an active social life, a terrible diet of fast food and a steady fitness routine.

She’d always been a petite woman, but now her Navy uniform was loose around her hips and her shoulders.

Suddenly she lost feeling in her ring and pinky fingers on both hands.

Then she couldn’t move from the neck down.

Her mom flew to Washington D.C. and brought her back to Louisville for treatment at what’s now known as the University of Louisville Health’s Frazier Rehabilitation Institute.

Over time, lesions formed from the base of her spine all the way up to her neck, and doctors feared they’d spread to her brain. After a myriad of failed treatments, she was transferred to the University of Louisville Health’s neurology department and prescribed chemotherapy as a last resort.

Her prognosis was grim, but that didn’t stop Johnson.

She reached out to the president of Trinity Washington University, and asked if she could finish her final couple of classes online through the University of Phoenix. When the school agreed, Johnson had a computer with a microphone set brought into her hospital room.

Only one of her hands could move, so instead of typing, Johnson spoke the words for the academic papers she was writing into that microphone, which turned them into text.

“At that time I was determined,” she remembered. “You’re not going to tell me I’m not going to get my degree. If I don’t live past these six months, you can’t tell me I did not accomplish these dreams.”

She had an incredible, unwavering faith in God, and believed she was going to survive.

The chemotherapy she received ultimately saved her life, and all the while, she was working toward a future no one was certain she’d have.

“I knocked out every single goal that I wanted to have,” she told me. “That right there, that was me determined.”

Earning her degree and keeping those lesions away from her brain, though, wasn’t the end of her medical battle.

Johnson stayed under hospice care until March 2018. Over the next year or so, she worked to regain her mobility and slices of independence. She learned to brush her own teeth, bathe herself, wiggle her feet and move from her bed to her wheelchair on her own.

Johnson first reached out to her now pageant coach Sprowl, a former Miss Black USA, because she wanted to compete in the Ms. Wheelchair Kentucky pageant. The veteran admits pageantry is well outside her comfort zone — she has always been a leader, but the glitz and the glamour attached to the title clash a bit with the self-proclaimed “tomboy” she’s always been.

But she’s eager to be a role model for girls with and without disabilities, and pageants were one avenue toward that goal.

“It’s OK not to be OK, it’s OK to be vulnerable, but make sure you’re taking care of yourself,” she told me. “The thing that changed inside of me and made me want to (participate and) be able to show others and girls from Louisville, who are from the same environment that I’m from, it’s OK to do something out of your comfort zone.”

Sprowl has always called Johnson “a walking miracle,” even though she wasn’t on her feet yet when they first connected for a consultation about two years ago.

Sometime around September 2019, she managed to stand up with a walker on her own, and then later, with help of physical therapists, she took her first steps in nearly two years.

“Everything the doctors said that she could not do, she has defied it and she continues to defy the odds,” Sprowl told me when we spoke on the phone.

As her health and her mobility progressed, she no longer qualified to compete in Ms. Wheelchair Kentucky, but suddenly Ms. Veteran America seemed possible.

But that would have to wait another year.

On the outside, it looked as though Johnson’s health was improving, but on the inside, she was living with an insurmountable level of pain. Neuromyelitis Optica had left her with scoliosis, a sideways curvature of the spine. She remembers watching the imaging of what was going on inside her body and also what it could become. It was horrifying. The bones in her back looked like two hands had taken a disposable water bottle and twisted it.

She had to do something, so doctors inserted those metal rods inserted in her back during a corrective surgery in September 2020. By the grace of God, she says, she started walking again just a few days after that.

Today the rods keep her from bending over the way she would have when she was reaching into the oven on the USS Wasp. She uses a grabbing tool to put on her shoes and socks and to pick up items from the floor.

One of many things that Sprowl admires about Johnson is that throughout it all, she never complains. She’s had multiple surgeries since they first met, and she keeps pushing forward. She doesn’t let her diagnosis limit her.

If she wins the competition, she’ll spend the year advocating for Final Salute Inc. and bringing awareness to issues that veteran women face.

Preparing for the pageant has taken up much of her time in recent months, but that’s OK.

She’s living with a disability but not living on borrowed time anymore — and just like that college degree she earned, she has a new list of goals she’d like to complete.

Johnson wants to start a nonprofit that helps young girls in Louisville with visible and invisible disabilities. She’s eager to bring attention to women veteran’s issues on the local level. She’s even talking about continuing her education and applying for master’s programs.

But first, she’s going to step into that gown and use that grabber to pull on her high heels, and she’s going to do the one thing on that runway doctors said she might never do again.