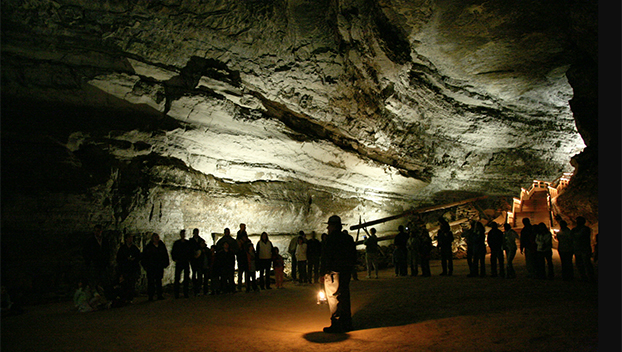 As Mammoth Cave became a national tourist attraction in the 19th century, there soon became a need for close-by accommodations.

Several lodges, hotels and inns have come and gone in what is now a national park. The first large hotel at Mammoth Cave opened in the early 1800s and utilized existing structures that had been used to house those involved in mining saltpeter — used to make gunpowder — from the cave. The large wooden building became the site of many events and gatherings before it burned to the ground in 1916.

A new hotel opened in 1925 and was again a popular tourist destination. A 1942 brochure notes that rooms with a bath were available for $3 a night; rooms without a private bath were $1.50. By the 1970s, the hotel building had become obsolete and was torn down.

While the hotels remain only as memories, photos and written histories, what was left of the buildings again came to light in recent weeks as a team of archaeologists and volunteers excavated the site of the buildings.

He said the excavations, funded by a grant from the Great American Outdoors Act, are required because of planned changes to the park.

While they are still years from being started, plans are for a new entry road to be built to the park and for the parking lot adjacent to the current park lodge to be converted into greenspace.

The former sites of the hotels, currently greenspace, would then be converted to parking areas.

Since the park is federal property, there is a legal obligation to conduct archeological excavations at the site before any construction.

“We need to account for and protect our natural and cultural resources,” Jakaitis said.

The second hotel, which opened in 1925, has been the main focus of the excavations, but since both previous hotels were on roughly the same footprint the team has also looked for remnants of that building.

“We have been searching for parts of” the older hotel, he said. “We are looking further back in time than 1925.”

There have been some intriguing finds during the dig, which started in July and ended Saturday.

Among the finds were an 1890 dime, a mother of pearl button, some hand-forged nails and various pieces of glass.

But the most intriguing find was a pair of large Delco “Farm Light” batteries dating from the 1920s that possibly provided early electrical power to light portions of the cave.

“We were really intrigued by that,” Jakaitis said, adding that while they can’t be sure the batteries were used for the specific purpose of lighting the cave, finding them “was a thrill for us.”

With the archaeological dig over, the site was again covered in dirt to await future development.