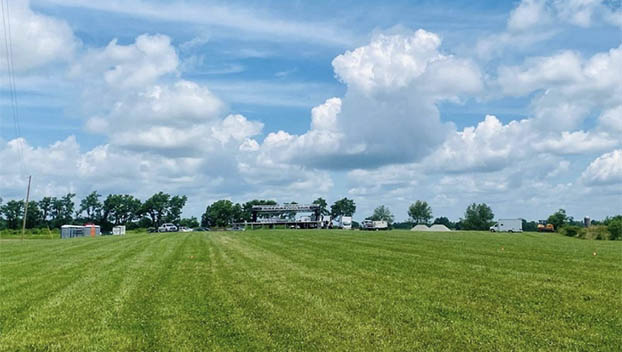 Six friends had a shared idea: to open a concert venue in Bath County.

Originally, they were looking at a 500-seat arena to showcase artists outside the hustle and bustle of a city. But when the Covid-19 pandemic hit, the idea for the venue got bigger and bigger.

Barnyard Entertainment Venue opened July 3 in Sharpsburg, a community in northern Bath County. The venue sits on a 172-acre farm and will be able to hold 8,000 people and grow over the years to host bigger concerts, festivals and events. The first act was Sawyer Brown for their soft opening.

Friends, Christy and Jeff Vice, John and Donnetta Dotson, Mark and Kathy Smith, have known each other for years. Their kids went to school together, and two of their kids are soon to be married.

They all brought their strengths, according to Christy Vice. John Dotson is in construction. Jeff Vice retired from the music industry in 2012.

Barnyard Entertainment Venue, located at 10005 W. Highway 36, in Sharpsburg, was purchased last summer. It was previously a hay farm.

For its official opening on the July 30 weekend, Barnyard will host rock band STYX and comedian Rodney Carrington with John Reep. On Aug. 13, country musician Travis Tritt with The Desert City Ramblers will perform.

“Even though our name is Barnyard, we’re not just going to do country music,” Christy Vice said.

The concerts and shows will be affordable, she promised, with general admission tickets about $40.

The massive black barn is nearing completion, even with hiccups from rainy days and the materials coming from Texas during its deep freeze. Once completed, the amphitheater will be a 70-foot tall stage. The owners plan to install a crow’s nest in the future.