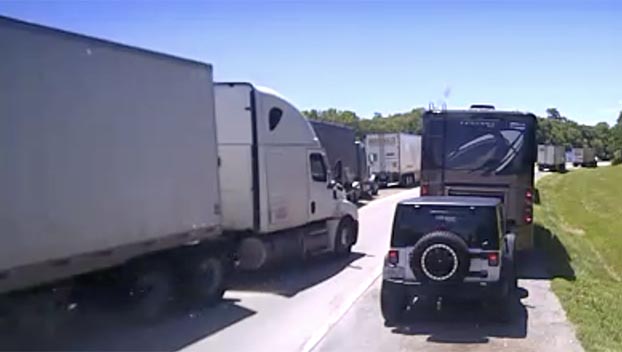 Kentucky police are asking for the public’s help in identifying the driver of a tractor-trailer in a hit-and-run collision that seriously injured a man on Interstate 64 last month.

Versailles Police released a video on Facebook Friday that shows a white semi-truck that is suspected of being involved in the incident. In the video, the truck is seen backing up and then driving away from the scene on June 22.

The Lexington Herald-News reports that Tennessee resident Gerald Sapp, 67, was severely injured In the incident.

According to family members, Sapp had pulled over at the rest stop at mile marker 60 in Midway to check his oil.

While Sapp had his hood up and was checking his oil, the tractor-trailer In question backed up and hit Sapp, crushing him between the two vehicles.

“While in the process of doing this a Semi Truck with a white trailer (this is the only description that we have of the truck for right now), backed up and hit my dad in the back with his trailer, crushing him in between the semi truck trailer and the bumper of his own vehicle,” Angela Taylor wrote on a GoFundMe page set up to help pay for Sapp’s medical bills. “He pushed my dad’s truck back approximately 40ft and with enough force that it pushed the radiator fan into the motor. My dad was trapped in between this truck and the trailer.”

“My dad has two broken femurs, a crushed pelvis and compound fractures of his lower legs. He has internal bleeding and as of this morning he is still in Trauma/Surgical ICU.

My dad has already undergone 22 hours of surgery and is facing another one tomorrow. He is in a lot of pain and will be unable to work for some time to come. The standard recovery for one broken femur is six months to one year. My dad is a Veteran and he has served his country. He hasn’t missed a day of work for as long as I can remember, maybe except when a grandchild was born (and that might even be half a day). He owns his own business, but it is now in jeopardy. That’s the reason that I’m sharing and creating this fundraiser. I know that he will be worried about his finances and try to ‘tough’ this out, but the hard reality is: He was hit by a semi truck and the wounds that he’s sustained are life threatening. They will take time to rehabilitated and heal.”

Could a building collapse happen in Kentucky?