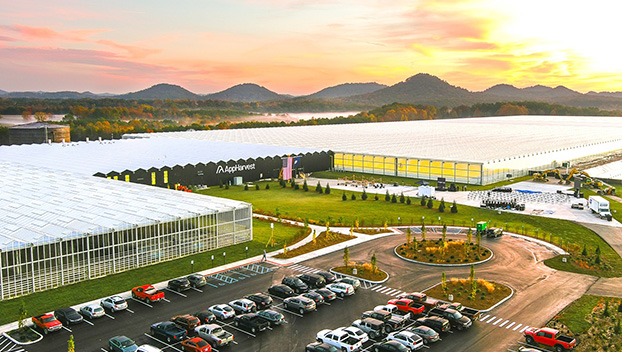 AppHarvest on Monday continued its fast-paced growth in Kentucky, announcing the start of construction for two more massive indoor farms and its expansion into growing berry crops.

The company said its new 30-acre indoor farm in Somerset will primarily grow strawberries. Its newest Morehead facility, about 15 acres, will produce leafy greens, it said.

“With today’s dual announcement, we put ourselves ahead of our development schedule,” said AppHarvest CEO Jonathan Webb. “Our Somerset and Morehead farms will build on the success of our flagship farm to provide higher quality produce using cutting-edge technology at a large scale.”

Both new facilities will produce non-GMO fruits and vegetables to be distributed to grocers and restaurants, the company said.

Gov. Andy Beshear applauded the latest expansion, saying: “AppHarvest has positioned Kentucky as a leader in the agritech industry, created hundreds of good-paying jobs for our people and pushed through and thrived during some of our most difficult times.”

Kentucky city leaders henpecked by ‘most talked about issue’…