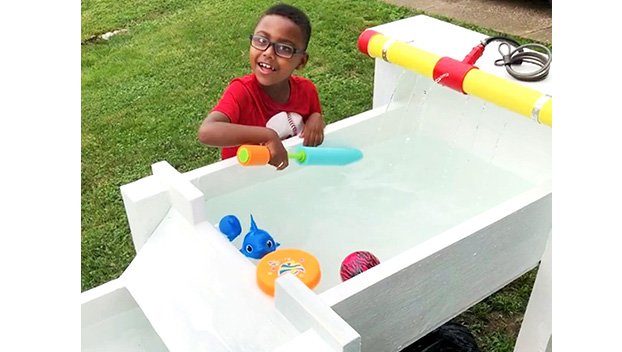 Once the table was completed, the firefighters thought it needed more toys, and Walmart donated a $75 gift card for toys.

“Gideon went from waking up and saying he was sad, to the first thing he does is open the curtains to see the water table,” Abby said. “It’s like his mind is blown.”

The Robinsons said water tables for children Gideon’s age and size don’t exist, but the ones that have been built for him have the correct height and are made of sturdier materials than the tables for toddlers, so he can’t fall into them or break them.

The new water table was delivered on a fire truck with sirens wailing.

“When all the firefighters showed up, I think it overwhelmed him a little bit,” Chuck said. “It was sensory overload. He was smiling, but he kept looking to us.”

“He’s non-verbal, but you could see his smile radiating,” Abby said.

The firefighters left something at the Robinsons’ house, and one firefighter returned later to pick it up.
“Gideon was all over that firefighter, hugging him and giving high fives,” Chuck said. “He’d had time to process what had happened.”

And the Robinsons have had time to reflect upon the gift.

“It’s a blessing,” Abby said. “The community has rallied behind Gideon several times. We’re so grateful to live in a community that’s shown so much love and support. People show up for every big thing and every little thing.”

“We didn’t ask for anything,” Chuck said. “This is such a blessing. It shows how we’re successful together.”