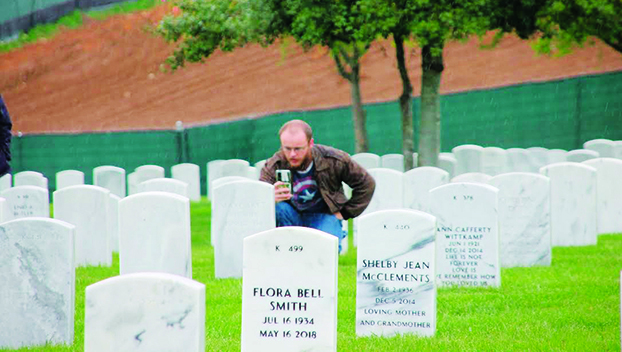 In an effort to honor the service of veterans and preserve their records, more than 100 volunteers gathered at Camp Nelson National Cemetery on April 24 to photograph and digitally upload the gravestones of all who are buried there.

More than 19,000 records had been uploaded by the conclusion of the project.

“The energy was amazing,” said Nicholasville resident Shawna Wachs, who served alongside her family and neighbors. “I am amazed that we were able to document that entire cemetery. We do it to preserve the information for future generations, and for family members who live a long distance away who can’t make that trek to see the headstone.”

The efforts at Camp Nelson were part of a larger project by “Just Serve” volunteers and members of The Church of Jesus Christ of Latter-day Saints.

Approximately 200 volunteers photographed and documented more than 30,000 military and civilian gravestones in Nicholasville, Danville, Mount Sterling, Lexington and other Central and Eastern Kentucky locations. All information was recorded through a genealogical database called Billion Graves, one of the foremost resources for GPS-tracked cemetery headstones.

“Most of my work was organizing and taking information,” said U.S. Air Force Reserve Maj. Tim Baxter of Nicholasville, one of the project organizers. “As we spoke to people coming in, I mentioned to them that this is a very special place and to make sure to give it the respect it was due. To have people coming out to perform this service for people who are like me, but who have passed on, was tremendously rewarding and satisfying.”

Camp Nelson itself holds a special place in Baxter’s heart.

“I’m always in awe when I go out to this cemetery,” he said. “[My wife] Ruth Ann and I sometimes go out alone. We’ll just sit and look across the rows and rows of symmetrical white grave markers and just give thanks to those who have served their country.”