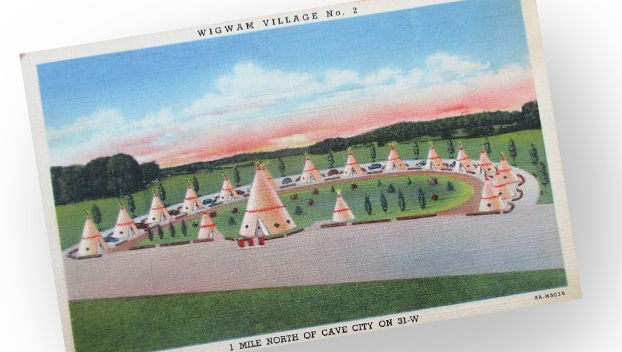 What some might see as a curiosity, Greg Davis of the Cave City Tourist and Convention Commission sees as a valuable contributor to his city’s economy.

So much so that Davis has gladly endorsed an investment in the Cave City property being branded as Historic Wigwam Village No. 2 that will help its new owners restore the historic inn and its 15 teepee-like motel rooms to a modern-day version of their glory days.

“It’s such an icon for this area,” said Davis, executive director of the tourist and convention commission. “One of the top questions we get when we go to conferences is if the wigwams are still there.

“It has been in need of repair. Now the new owners are going to bring it back to its heyday. We’re very pleased to see it come back.”

That comeback begins in earnest Saturday, when new owners Keith Stone and Megan Smith officially unveil the neon “Sleep in a Wigwam” sign that was refurbished at Louisville’s Rueff Sign Co. with the help of the tourist and convention commission.

Davis said the commission awarded a $2,500 grant to help Stone and Smith pay for repairs to the neon sign that will be turned on about 7 p.m. Saturday as part of an open house event scheduled to last from 6:30 to 8 p.m.

“Bob Rueff with Rueff Signs had the skills to do the neon,” said Stone, who plans to have a wigwam cake and sleep-in-a-wigwam cookies at Saturday’s event.

It will be a grand opening of sorts for Wigwam Village, which actually reopened under its new owners in March.

Stone and Smith bought the 4.5-acre property from Bowling Green’s Afzal and Masuda Rahim, who had owned the quirky tourist attraction since 2005.

The sale was handled by Glasgow Realtor Kerry Mears, who listed the property last year for $395,000 and thought she had it sold to a buyer from Lexington in September.