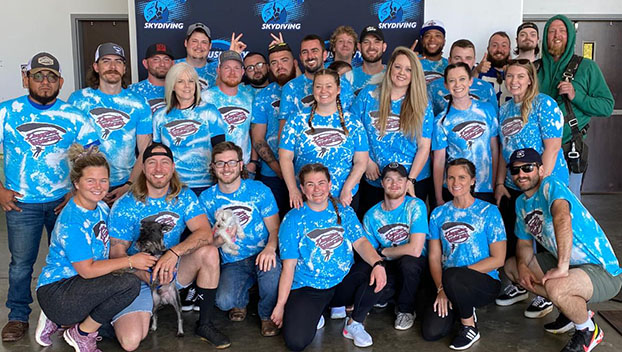 Inspired by a quote from Will Smith, “God put the best things in life on the other side of fear,” Cody Dugger, owner of Duggers Bar and Grill in Madisonville, took around 40 people skydiving last weekend.

The trip started by helping a friend, Noah Davis, who is a regular at the bar and has always wanted to go skydiving.

“I never had a chance to talk to anybody about it because everyone I spoke to was like no way,” said Davis.

Dugger and his girlfriend, Kaitlyn Jones, who is also the general manager at the bar, came back from a trip to Hawaii last month where Jones skydived for the first time and Davis wanted to know about it. Dugger and Jones offered to go with him for his first time.

“I asked them some questions and then all of a sudden, I have a bunch of my buddies jumping out of a plane,” said Davis.

According to Dugger, several of the employees and regulars at the bar heard about the skydiving trip and decided they wanted to go to.

Jones booked the trip with Music City Skydiving in Waverly, Tennessee and organized it for everyone who wanted to participate. She said they were originally supposed to jump on April 11, but inclement weather forced the trip to be postponed.

She said for the first trip, they had around 20 people interested in going, and by the time April 25 came, close to 40 people were going.