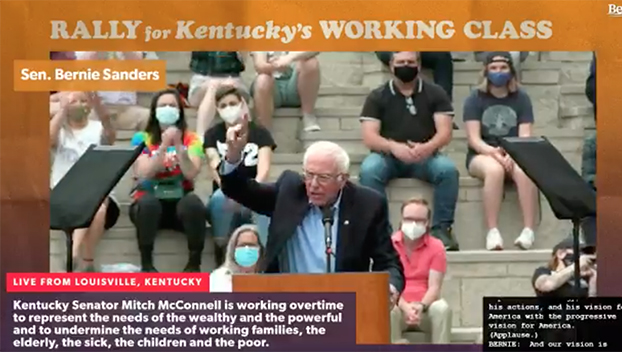 The “Rally for Kentucky’s Working Class” was held outside the Muhammad Ali Center in Louisville.

Booker, a Democrat whose unabashedly progressive campaign in Kentucky came up just short in last year’s Senate primary, is forming an exploratory committee as he weighs a follow-up race in 2022 against Republican incumbent Sen. Rand Paul.

The difference in ideology between Senator McConnell and myself, between the Republican Party and the progressive movement, is not a question of big government versus small government. It’s a question of whose interests the government represents. #BernieInKY pic.twitter.com/VBaV4ts4vW

Sanders thanked Booker “not just for being here today but for showing this state and this country what grassroots activism can mean. And despite being heavily outspent, Charles ran a campaign that the whole country looked at and I have a feeling that the next time around, the results are going to be different.”

“I got a little bit of nostalgia here standing on this stage,” Booker, a Black former state lawmaker, told the crowd Sunday. “We were starting to tell a story, and I think we’re not done telling that story, if you understand what I’m saying.”

Booker seized momentum late in last year’s Democratic Senate primary on the strength of a “Hood to the Holler” campaign that highlighted the common interests of Black Democrats in the cities and middle- and low-income white people in the mountains of eastern Kentucky.

“We’re here today not to just rally for the sake of feeling good, but to get ready for the work that comes after we leave here,” Booker said.