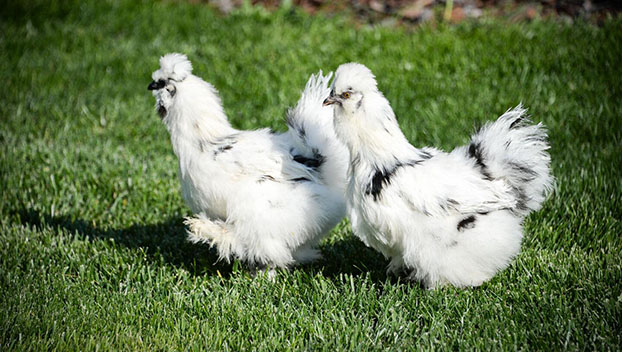 There have been some important issues facing Frankfort’s City Commission recently — hiring a new city manager, the development of Parcels B and C.

At its last meeting on April 12, the commission discussed a current ordinance that forbids the keeping of chickens within the city limits and heard citizen comments, mostly in support of allowing citizens to have chickens in their yards.

Earl Burton isn’t one of those who supports a change.

“It seems the people most vocal about it are the ones in favor of the chickens,” said Burton, who lives in the Silver Creek subdivision. “I don’t see anyone else against the ordinance. When I talk to property owners they chuckle and say that’s the craziest thing they’ve ever heard of, but that’s as far as it goes.”

Delvin Azofeifa, who lives in the Hickory Hills neighborhood, likes the idea of raising chickens.

“This would allow people a modicum of self-sufficiency.”

The city currently doesn’t allow livestock, which includes chickens, to be kept in the city limits.

Franklin County allows up to five non-crowing chickens to be kept on tracts of less than five acres, with the number of chickens allowed based on the size of the tract.

There are also requirements for a fence or structure to prevent the chickens from leaving the owner’s property.

“Plenty of communities, large and small, like Louisville and Lexington, have done it, have done it successfully and done it without serious issues,” City Commissioner Kelly May said.

“We don’t have to reinvent the wheel here. We have to cross our T’s and dot our I’s and make sure we listen to both sides.”
That’s a point that concerns Burton.

“I don’t think everyone’s voice is being heard,” he said. “I’d like to see it put on some kind of ballot or whatever, where people could vote whether or not they wanted chickens. If the majority was in favor of chickens, then the people have spoken. It’s a free society.”

Commissioner Katrisha Waldridge has suggested the possibility of bringing the issue to a public vote.
How many people are in favor of allowing chickens in the city limits is up for debate, but May has heard plenty about the issue.

“After the election, no, but during the campaign, yes,” said May, who was elected in November. “I think I received more emails asking my opinion about chickens than any other issue.”

He added that those seeking his opinion didn’t offer theirs.

“They wanted to know my stand on it as a candidate,” May said.

If an ordinance is passed to allow chickens, May has some ideas on how it should be handled.

“I like the idea of making sure we know who’s taking part, especially as it rolls out. People could be making mistakes by accident. They may not be sure of all the requirements, and it’s important that we’re very, very reachable.”

From the citizen comments read aloud at the commission’s last meeting, the most popular reason for raising chickens is for their eggs.

“This is just me personally, but the yolks in grocery store eggs, it seems like one out of three splatter when you open them up,” Azofeifa said. “With brown eggs I’ve never had that problem.”

For Burton, both types of eggs are the same.

“I love eggs,” he said. “I probably eat eggs a couple times a week. They’re one of the least expensive food items you can buy. I’ve eaten fresh eggs and eggs you buy in a store. People may be able to tell the difference, but I can’t.

“If people want fresh eggs, they can go to the farmers who sell them.”

Less driving is one of the benefits Azofeifa sees in allowing people to own chickens.

That also applies to gardens.

“I understand being self-sustaining,” Burton said. “I’ve had gardens in my backyard and they’re great, but they’re something that doesn’t impact anyone else. I grow vegetables I eat myself and share with neighbors.”

Azofeifa also grows his own vegetables and this year will be growing medicinal herbs, and he’s looking forward to raising chickens.

“If they pass the ordinance, I’ll get me some,” he said.

Commissioner Kyle Thompson expressed his opposition to keeping chickens within the city limits at the commission’s most recent meeting.

“I’ve from the beginning held the position, and still hold the position, that chickens should not be allowed in the city,” he said at the meeting. “I think there are concerns that aren’t necessarily debunked … 2017 was the largest reported number of salmonella outbreaks linked to backyard poultry.”

According to the Centers for Disease Control website, in 2017 the CDC and multiple states investigated 10 separate multistate outbreaks of salmonella infections in people who had contact with live poultry in backyard flocks.

The outbreak strains of salmonella infected a reported 1,120 people in 48 states and the District of Columbia with 249 people being hospitalized. One death was reported from North Carolina.

As for what would happen if chickens became a nuisance, May thinks that could be regulated.

“If your dog is creating a disturbance, your neighbors have the right to notify animal control,” he said. “We have ordinances in place, and we could be doing the same thing with chickens.

“What’s important to me that people know is I’m in support of it, but it’s important that everyone is feeling comfortable with it.”

Frankfort Planning and Community Development Director Eric Cockley said that staff, including himself and City Attorney Laura Ross, were instructed by Mayor Layne Wilkerson to look into the issue and report back to the commission at a later date. The agenda has not been released for the commission’s next meeting scheduled for Monday at 5 p.m.