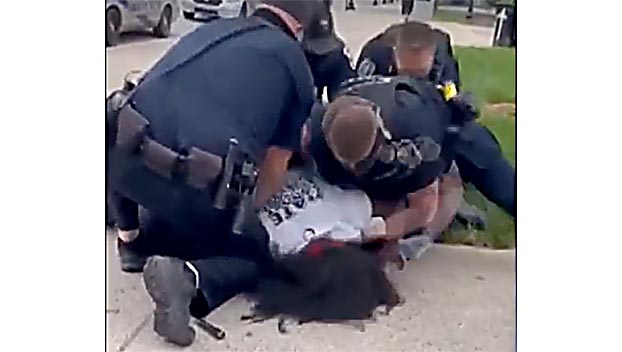 A police officer in Kentucky was seen on video repeatedly punching a protester in the head while the man was face down on the ground and being arrested by several officers during a police brutality protest Sunday afternoon.

Several Louisville Metro police officers were seen in a Facebook video of 29-year-old Denorver “Dee” Garrett being arrested near Jefferson Square Park, the site of numerous demonstrations over police brutality and the death of Breonna Taylor, a 26-year-old Black woman who was shot and killed by Louisville police in March 2020.

In the video, an officer attempting to handcuff Garrett tells him several times to “stop flexing.” The officer then yells “stop” once more before multiple officers force Garrett to the ground. The initial officer then punches Garrett’s head at least three times while onlookers scream at officers to stop. It appeared Garrett’s glasses were broken in the struggle.

News outlets reported an arrest citation stated Garrett “was causing a disturbance” in the middle of the street for about 30 minutes prior to his arrest. The citation said Garrett “resisted the officers’ movements to put his hands together close enough to put handcuffs on” and later the officer took Garrett to the ground and “delivered 2-3 closed hand strikes” to his face.

Garrett was charged with disorderly conduct and resisting arrest.

Police Chief Erika Shields said in a statement to news outlets that the video “raises serious questions and is not consistent with LMPD training.” Shields said the department is investigating the officer’s conduct.

It’s unclear whether the officer was placed on leave. The names of the officers involved weren’t immediately released.

Jaime Hendricks, who took the video, told the Courier Journal that Garrett was protesting in the crosswalk, carrying a large cross that has made him recognizable at local demonstrations.