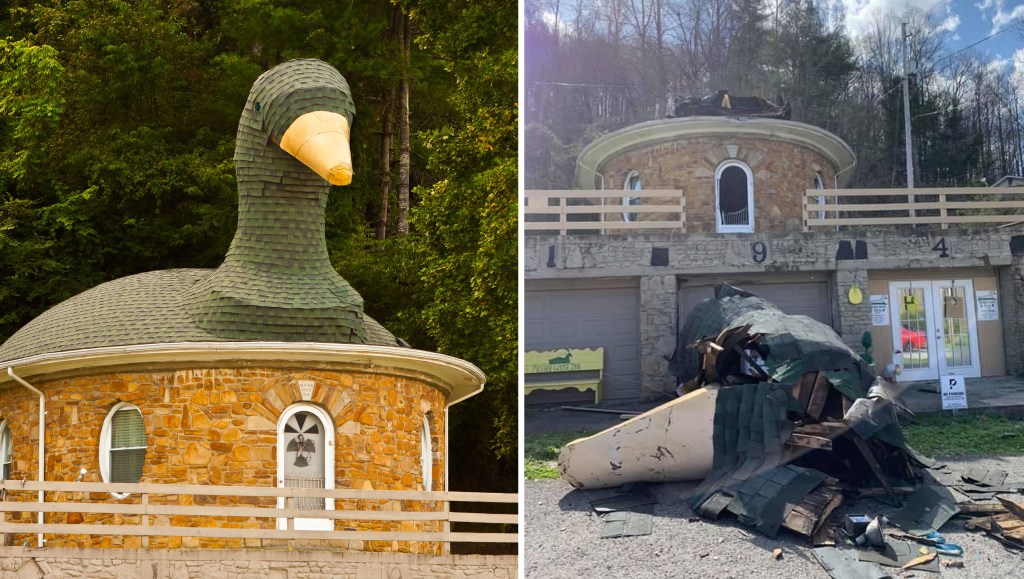 A community in Kentucky is rallying to help restore an 80-year-old landmark — an oval shaped building that has a domed roof with the neck and head of a goose sticking out the front. Until last week, that is, when the goose was beheaded by strong winds.

The owners had put up a Go Fund Me page on March 20, saying the head had moved off its foundation and couldn’t be stabilized. They were raising funds to reconstruct it. Then on Wednesday, they posted an update. The head had fallen.

The building has served as a home, a service station, a market and an inn over the years, WYMT-TV reported. Now community support in Hazard is pouring in. As of Saturday afternoon, the Go Fund Me page had raised more than $7,000. The Kentucky Heritage Council in Frankfort has also pledged to help out.
So has Joey McKenney, owner of the Appalachian Apparel Company.

“Last week when they were trying to raise money — they said they were having some problems with the roof and the structure and things like that — and so I just kind of started thinking at that point what we could do to kind of help raise money,” he told the station.

He came up with a T-shirt designed to look like an old newspaper clipping with the headline, “Beloved Landmark, Beheaded!” McKenny said they will split with profit on the shirt, which should mean around $6-$8 per shirt going to the fund to rebuild the goose. On Friday, he said he already had orders from people in 11 different states.

“People from all over the world have come here and taken pictures of it,” Neace said. It’s one of the most photographed places in East Kentucky.”