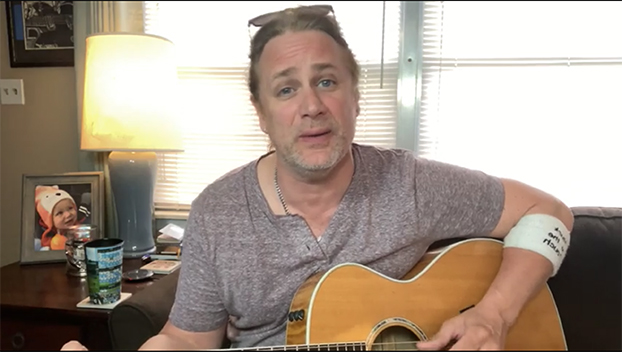 Carl Stuck never felt nervous in front of an audience.

The crowds, the lights and the noise around the stage never bothered the Louisville musician.

But a lonely iPad in his living room at the beginning of a pandemic? That made him “really freaking nervous” as he sat on the sofa in his house and banged out Chicago’s “Saturday in the Park” from his keyboard.

Like so many of us on March 17, 2020, at the onset of the COVID-19 shutdown, Carl was stuck on his couch faced with a new reality. Musicians throughout the country were out of work as the bars, restaurants, nightclubs and music festivals they frequented were closed or canceled. Singing was considered a super spreader, and dark, stuffy shoulder-to-shoulder crowds were out of the question.

He wasn’t sure when his next gig would be or where his next paycheck was coming from.

That day he logged on to Facebook Live and he played for 19 minutes for anyone that needed a little music. The new father put up a virtual tip jar, in hopes that people would “dig it” and assure his “kiddo stays fed.”

That’s how “Stuck on the Couch” was born, and more than a year later, it’s still going.

By the time I spoke with Carl, the local singer-songwriter was just a day away from365 days of consecutive, digital performances.

Guest stars have included his small son and his dogs, Maggie and Luna. Occasionally, he’s left his sofa for other scenery. Once he played from a fellow musician’s home, and another time he brought his digital audience to a local studio while recording an album.

The show went on the road with him when he traveled to Florida for a brief getaway. “Stuck on the Couch” even came to his sister’s car, while he waited in a hospital parking lot for news about his father, who was ill inside.

At one point, he even fought through his own case of COVID-19, he told me. During the worst of it, he remembers sleeping for 22 hours a day and only got out of bed to play the show.

But most of the time, he kept it festive and fun.

Around Halloween, he used a vampire digital filter that had bats fly around him and let blood drip from his teeth. Throughout the month of December, he performed in front of a digital fireplace and by the light of his Christmas tree. He’d take requests for songs like “Jingle Bells” and Nat King Cole’s “The Christmas Song,” and he’d mix in a few of his own songs, too.

He never planned for “Stuck on the Couch” to go on for a year, he told me, but really, none of us expected for the pandemic to rage on this long.

Carl could have called it quits on the show at any time, particularly as more venues have slowlyopened as the number of COVID-19 cases has dropped. He plays some live gigs now, but even now that’s he’s back to a paycheck and a real tip jar, he kept the livestream going.

In a strange way, he’s built a community through the comments section. His fans call themselves “couch potatoes” or “spuds.” His numbers have fluctuated throughout the year, but often as many as 200 people tune in for his shows. He’s garnered regulars from as far away as Arkansas, Pennsylvania, New York and Texas. Most of his videos have been played as many as 2,000 times.

There’s a sense of loyalty and dedication that comes with that kind of response.

And while he doesn’t intend to stream every day now that he’s hit the one-year mark, he’s not ready to give it up entirely either.

“Over time that nervousness disappeared,” Carl told me. “It really truly felt like sitting on a couch with friends with a guitar.”

How to watch ‘Stuck on the Couch’

Tune in to Louisville musician Carl Stuck’s “Stuck on the Couch” series on Facebook Live at facebook.com/carlanthonystuck.