Vehicles swallowed up by collapsing embankment in Eastern Kentcuky 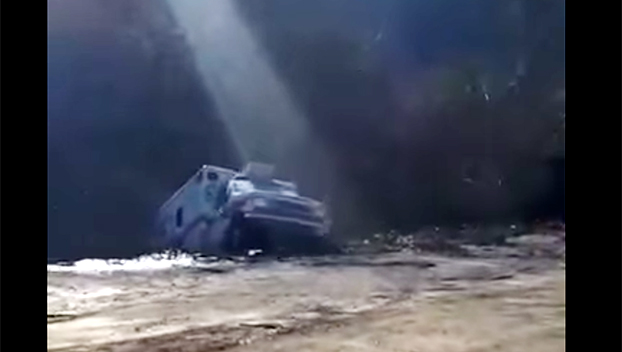 Several vehicles fell into a collapsing embankment Thursday morning in the eastern part of Kentucky.

According to the Paintsville Police Department, the collapse created a slip estimated to be 100 feet wide and 400 feet long.

Investigators said no injuries have been reported in the collapse, though a nearby garage is temporarily relocating its equipment and staff.

“What I saw was the worst flash-flooding that I’ve seen in my lifetime,” Beshear said after touching down in Beattyville in a National Guard helicopter to talk with local officials.

Beshear spoke at a community center there piled with donated good, clothing and cleaning supplies. He estimated that 200 homes were affected in Lee and Breathitt counties but said it could take weeks to get a full assessment of the damage.

Beshear went to Western Kentucky earlier in the week, but Friday was his first flight over the areas of Eastern Kentucky hit by the worst flooding in decades.

Beshear and Michael Dossett, head of Kentucky Emergency Management, said the state will request public assistance from the Federal Emergency Management Agency to help cities, counties and the state deal with damage to roads and other infrastructure. They will also seek individual assistance to homeowners. The individual assistance is more difficult to get approved, but if the state qualifies, homeowners with damage could get up to $35,000 from FEMA, Dossett said.

The initial focus of the damage assessment will be on eight of the hardest hit counties — Estill, Lee, Owsley, Breathitt, Powell, Jackson, Clay and Johnson. Officials urged people to document the damage to their homes and businesses to aid that process.

A total of 71 cities or counties in Kentucky made local disaster declarations in addition to the state declaration, Dossett said.

Kentucky begins to dry out and clean up after…