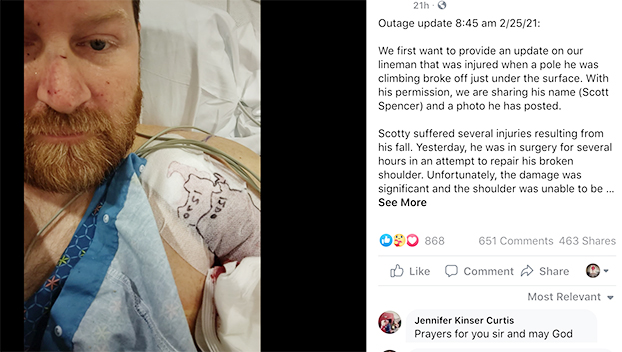 An Eastern Kentucky power worker was seriously hurt when the pole he was working on broke, causing the worker to fall 27 feet to the ground.

Scott Spencer, a lineman with the Licking Valley Rural Electric Cooperative in West Liberty, was air-flighted to UK Hospital where he is expected to recover.

In addition to breaking his shoulder and both arms, Spencer suffered additional scrapes and bruises, the cooperative said. He had surgery on his broken shoulder, but the damage was significant enough that it couldn’t be repaired.

According to a news release from the co-op, the lineman had secured himself near the top of the pole in accordance with safety protocol when the pole broke. The veteran lineman fell 27 feet, making impact in a small creek in the Cave Branch area near Bethany. Fellow linemen rushed to his aid, releasing him from the pole restraints and rescuing him from the icy water. They wrapped the seriously injured lineman with their jackets to keep him warm until emergency crews arrived.

“We would like to thank Breathitt-Wolfe EMS for their quick response and Air-Evac for flying our lineman to the University of Kentucky Hospital,” said John May, Licking Valley RECC manager of administrative services. “We are all shaken but we will carry on. We ask that you keep him, his family and all his co-workers in your thoughts and prayers in the coming days.”

Messages of support and prayer have flooded into the Southeastern Kentucky cooperative.

“The safety of cooperative crews and co-op members is our top priority. This incident underscores the dangerous nature of storm restoration work,” said Chris Perry, president and CEO of Kentucky Electric Cooperatives, the statewide association which supports local co-ops. “We know that patience is wearing thin among those still without power, and co-ops are working to restore power as quickly as they safely can. But, co-op crews are not robots, and this accident is a humbling reminder that these linemen risk life and limb to help their fellow co-op members.”