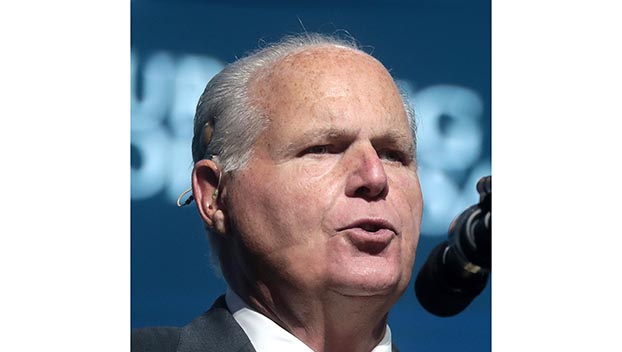 Rush Limbaugh, the talk radio host who ripped into liberals, foretold the rise of Donald Trump and laid waste to political correctness with a merry brand of malice that made him one of the most powerful voices on the American right, died Wednesday. He was 70.

Limbaugh, an outspoken lover of cigars, had been diagnosed with lung cancer. His death was announced on his website.

President Trump, during a State of the Union speech, awarded Limbaugh the Presidential Medal of Freedom, the nation’s highest civilian honor.

Unflinchingly conservative, wildly partisan, bombastically self-promoting and larger than life, Limbaugh galvanized listeners for more than 30 years with his talent for vituperation and sarcasm.

He called himself an entertainer, but his rants during his three-hour weekday radio show broadcast on nearly 600 U.S. stations shaped the national political conversation, swaying ordinary Republicans and the direction of their party.

Blessed with a made-for-broadcasting voice, he delivered his opinions with such certainty that his followers, or “Ditto-heads,” as he dubbed them, took his words as sacred truth.
“In my heart and soul, I know I have become the intellectual engine of the conservative movement,” Limbaugh, with typical immodesty, told author Zev Chafets in the 2010 book “Rush Limbaugh: An Army of One.”

Forbes magazine estimated his 2018 income at $84 million, ranking him behind only Howard Stern among radio personalities.

Limbaugh took as a badge of honor the title “most dangerous man in America.” He said he was the “truth detector,” the “doctor of democracy,” a “lover of mankind,” a “harmless, lovable little fuzz ball” and an “all-around good guy.” He claimed he had “talent on loan from God.”

Long before Trump’s rise in politics, Limbaugh was pinning insulting names on his enemies and raging against the mainstream media, accusing it of feeding the public lies. He called Democrats and others on the left communists, wackos, feminazis, liberal extremists, faggots and radicals.