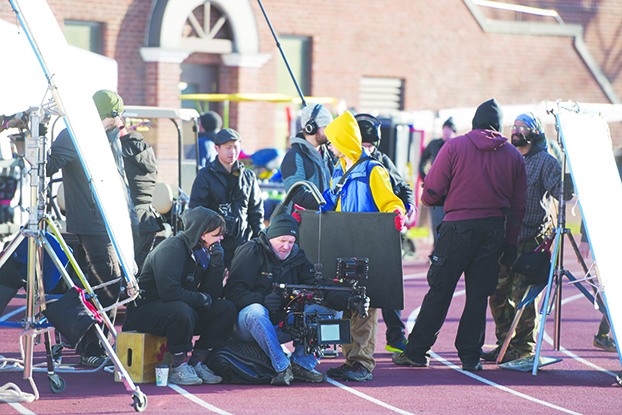 Photos from the set of "Rust Creek" an independent film production that visited Centre's campus on March 1st and 2nd, 2017. - Photo submitted

Over the autumn, the thriller Rust Creek, which features scenes set in Boyle County and at Centre College, became available on Netflix. Though it originally premiered in 2018, it rose through the ranks on Netflix and made it into the top five most-watched movies within a few weeks of being available on the platform.

Actress Hermione Corfield plays the lead, Sawyer, a Centre student. When Sawyer gets an exciting job interview, she doesn’t want to jinx it, so she doesn’t tell anyone about it and sets off on her own, getting lost in the backwoods of Kentucky on her way and encountering some dangerous characters.

The film’s producer, Stu Pollard, is a Kentucky native with ties to Centre through his father who splits his time between Louisville and Los Angeles, said Michael Strysick, chief communications officer for Centre. Strysick said he and Jamey Leahey, who is Centre’s in-house attorney, were mentioned in production credits in the movie due to their roles with Centre, and students were actively involved in some scenes during movie production as well, as extras or filling other roles.

Leahey and Strysick regulated some of how Centre was portrayed in the film, including working with Pollard and the production team on locations to shoot scenes on campus. Pollard had called Centre and asked if they’d be interested in being a part of the film. Strysick said Pollard was generous — he let him and other Centre representatives look at the screenplay to make sure they were comfortable with what was said and done regarding the college. The production team worked with Centre intensively for four or five days, Strysick said, during which Centre got a taste of what it was like to produce a film and the number of hours it takes to shoot a single scene. He said some scenes shot didn’t make it into the movie, but it was still valuable to students and the community to shoot them.

“Those of us who live here in Danville and Boyle County know how beautiful this area is, how wonderful our downtown is, so I think it was great, even if the scenes were short, for people to be able to see that,” Strysick said. “Those of us who work at Centre College know that this historic campus that’s now 200 years old is just a beautiful place. We have beautiful buildings, and it’s maintained well, so it was a really positive thing to see that showcased.”

Strysick said he and other representatives from Centre also were drawn to the character Sawyer since she rises to meet the challenges she faces in the film.

“She is a strong, thoughtful, independent person, and I think that in a way she kind of embodies the students that we have at Centre, people who are able to navigate life and its challenges and also deal with adversity,” Strysick said.

Jamee Peyton, interim executive director for the Danville-Boyle County Convention and Visitors Bureau, said something similar to Strysick about what it meant to her to have scenes of the film feature Boyle County.

“Danville-Boyle County is a beautiful historic place filled with a variety of unique experiences,” Peyton said in an email. “The added exposure of our vibrant town through a Netflix film simply allows Danville-Boyle County to reach people outside of our community who are missing everything we have and hope to offer our travelers.”