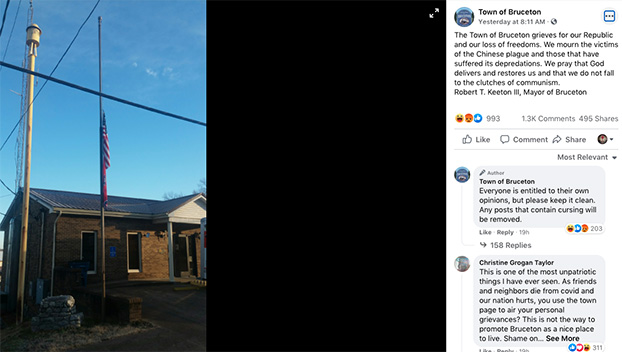 More people who live in the small Tennessee town of Bruceton are weighing in on the mayor’s order to lower the American flag to half-staff before President Joe Biden’s inauguration on Wednesday.

“The Town of Bruceton grieves for our Republic and our loss of freedoms,” Mayor Robert T. Keeton III wrote.

Whether the post was made with town approval is unclear.

Keeton’s statement was posted on the Town of Bruceton’s official Facebook page. In the post, the mayor referred to the coronavirus as the “Chinese plague” and said he was praying “God delivers and restores us and that we do not fall to the clutches of communism.”

Thursday morning, the post had been shared close nearly 500 times and has garnered more than 1,300 comments.

About 1,300 people live in Bruceton, a town that sits on the eastern edge of Carroll County. The county voted overwhelmingly for Donald Trump on Nov. 3.

Some residents expressed frustration with the mayor’s post calling it mean and unpatriotic. Others expressed support for the move.

Former Kentucky mine safety chief admits to tampering with…