Kentucky man charged with being part of mob who stormed U.S. Capitol 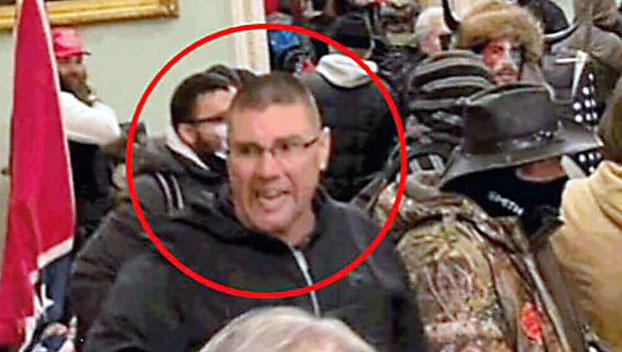 The FBI has filed a criminal complaint against a Kentucky man who authorities said was among a group that illegally stormed the U.S. Capitol with supporters of President Donald Trump during a deadly insurrection earlier this month.

Michael Sparks of Elizabethtown, Kentucky, was charged in the complaint filed Sunday in federal court for the District of Columbia with unlawful entry, disorderly conduct and obstructing law enforcement.

It wasn’t immediately known whether Sparks has an attorney who could comment on the charges.

According to a statement of facts submitted by an FBI special agent, an acquaintance of Sparks called the FBI to identify Sparks in photographs and in video as being the first individual to climb through a broken window into the U.S. Capitol on Jan. 6.

Once inside the Capitol, Sparks appeared in a video with a group of men led by Douglas Jensen, a right-wing conspiracy theorist from Iowa, the statement said. Sparks is seen confronting a U.S. Capitol police officer, shouting “This is our America!” and pointing a finger at the officer, authorities said.

The tipster also said she overheard Sparks previously discuss his plans to travel to Washington to attend Trump’s Jan. 6 rally that preceded the riots. She said Sparks told someone else about the Capitol, “This time we are going to shut it down.”

The FBI also was tipped to messages posted by Sparks on his Facebook page in which he said, “TRUMP WILL BE YOUR PRESIDENT 4 more years in JESUS NAME. No need to reply to this just be ready for a lot of big events. Have radios for power loss etc. Love every body,” according to the statement.

Other Kentucky residents who have been charged in the riots include:

— Chad Barrett Jones of Coxs Creek, Kentucky, was arrested Saturday on charges of assault on a federal officer, certain acts during a civil disorder, destruction of government property over $1,000, obstruction of justice, unlawful entry on restricted building or grounds, violent entry and disorderly conduct on Capitol grounds.

— Damon Michael Beckley of Louisville was arrested Saturday on charges of unlawful entry of a restricted building and disorderly conduct on Capitol grounds.