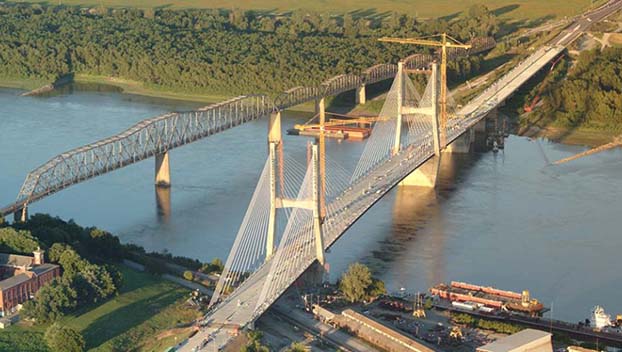 Leaders in the Evansville area say they’re expecting action in the coming year toward the construction of an Interstate 69 bridge over the Ohio River between Indiana and Kentucky.

The biggest step would be federal approval of a route for the new bridge that would cost an estimated nearly $1.5 billion.

Indiana Gov. Eric Holcomb has included that bridge route decision among his administration’s 2021 goals, along with continuing construction of the final section near Indianapolis of the I-69 extension through southern Indiana to Evansville.

Funding sources remain uncertain for the bridge project, although Henderson County, Kentucky, Judge-Executive Brad Schneider said the preliminary work for its construction was getting done.

“The states are getting very close to reaching some final decisions and what grants can be sought on the federal level,” Schneider told the Evansville Courier & Press.

Plans call for the charging of traffic tolls for crossing the new I-69 span, while the fate of the two current U.S. 41 bridges linking Evansville and Henderson, Kentucky, remains undecided. Local leaders have opposed the I-69 bridge project team’s proposal to shut down one of the U.S. 41 bridges and convert the remaining span to two-way traffic.

“I know the states talk on a regular basis on where this project stands,” Winnecke said. “Each state is trying to identify its funding streams for this. I couldn’t tell you what the timeline is, but we feel comfortable with the process of where it is.”